A lot has happened since you and I last spoke. I still have all four limbs intact and I hope the same can be said for you. I’ve crossed six borders in a from-hell 24-hour bus ride, 800k with a Brit who owned a Bug and then finally a lovely ferry that brought me into the great unknowns of South America.

At the previous dispatch I was straight-chilling at the lovely Lake Atitlan in Guatemala and had just engaged in what would be a one of the best Couchsurfing probably anyone ever has gotten in on. Looking back, sifting through the fog those memories live in, maybe a whole year has slipped past! Closer to reality, I would say about 5 weeks. If I was a little more organized (which will be my epitaph when I pass no doubt) and got these out in a timely manner, this could just read in regular chronological order. I’m not, duh, so we’re going to move from the now, BACK TO THE FUTURE!!! (sorry…) Anyway, now take me by the hand… 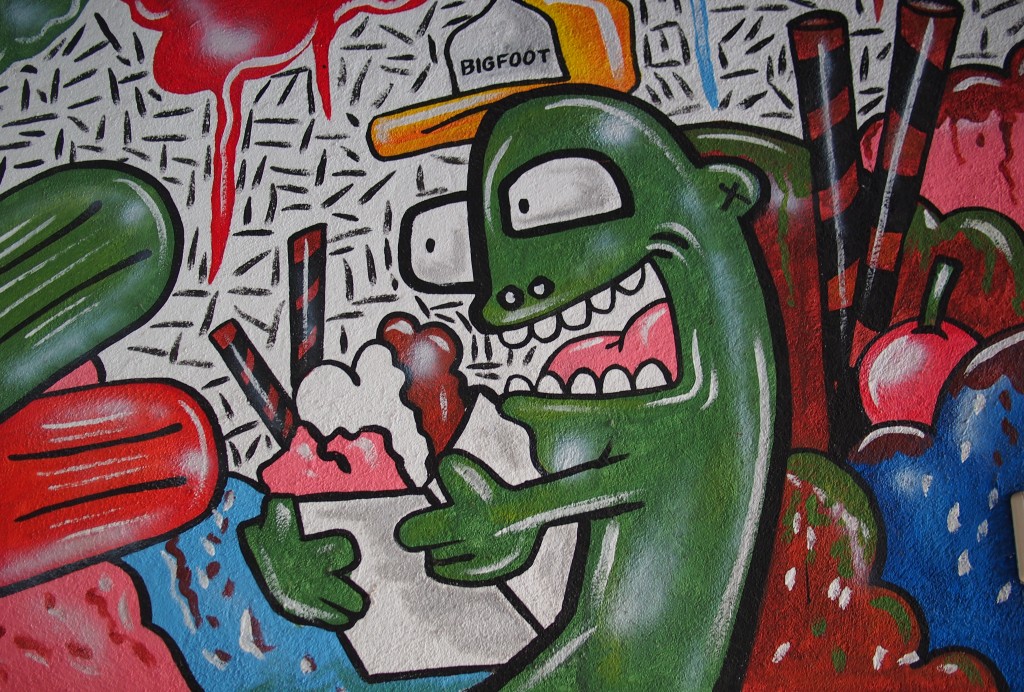 Currently, I sit in a quaint hostel in Cartengena, Colombia with a Canadian friend I picked up way back at the lake and have been more or less on the road with ever since. We haven’t even been here a full day, but already this city is, by a large margin, cleaner and safer (seeming) than any city we have visited so far. To all the naysayers of Colombia’s safety, reread the previous paragraph thanks. I think Canada and I will spend X-mas together in Medellin, part ways, I will see an old UF friend where he lives in Bogota, and there are two/three nice HelpX prospects on the way south in CO, so we shall see. 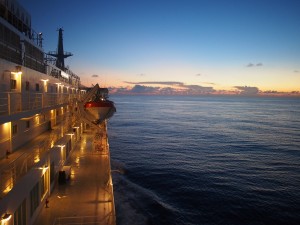 To get to this lovely continent, said Canadian and I (he has a name, I guess, it’s Ian) took a nice over ferry from Colon, Panama to here, Cartengena. The ferry really wasn’t bad. We had only paid for a seat, but there was plenty of room to sprawl out on the floor and spend the night sleeping. I didn’t really get any great sleep the night before so I spent a little more time than I might have liked awkwardly stuffed into a corner of the room, but that a shoe that fits quite well for me. One final and hilarious note was the name of the company that ran the ferry was an acronym called SNAV. Who knows what it stood for, but a “v” in Spanish is phonetically identical to a “b” so whenever the loudspeaker came on it was “SNOB cares about you and SNOB is here to help…” WE thought it was funny thank you. 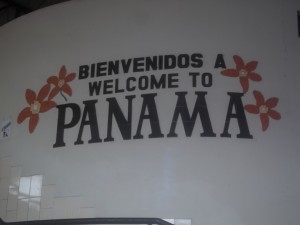 Before the ferry was a week of “peak-lazy” time spent at a sweet housesit in Gamboa, Panama. Ian and his States-ian friend Ben set up a housesit (go online, there are tons of sites for this) and invited me to come join for a week. Free rent is pretty much the air I breathe so I was there. I had been picked up in Nicaragua by a fine Brit named Jacob and he gave me a ride there to join in on the madness. There were four dogs and six cats to be taken care of and tons of great food the owners told Ben/Ian to have at. A combination of decent ingredients, a good kitchen, some beer and a few 100 movie channels is something I’m completely powerless towards. Needless to say, I got a lot movies watched that weekend that didn’t really need re-watching. 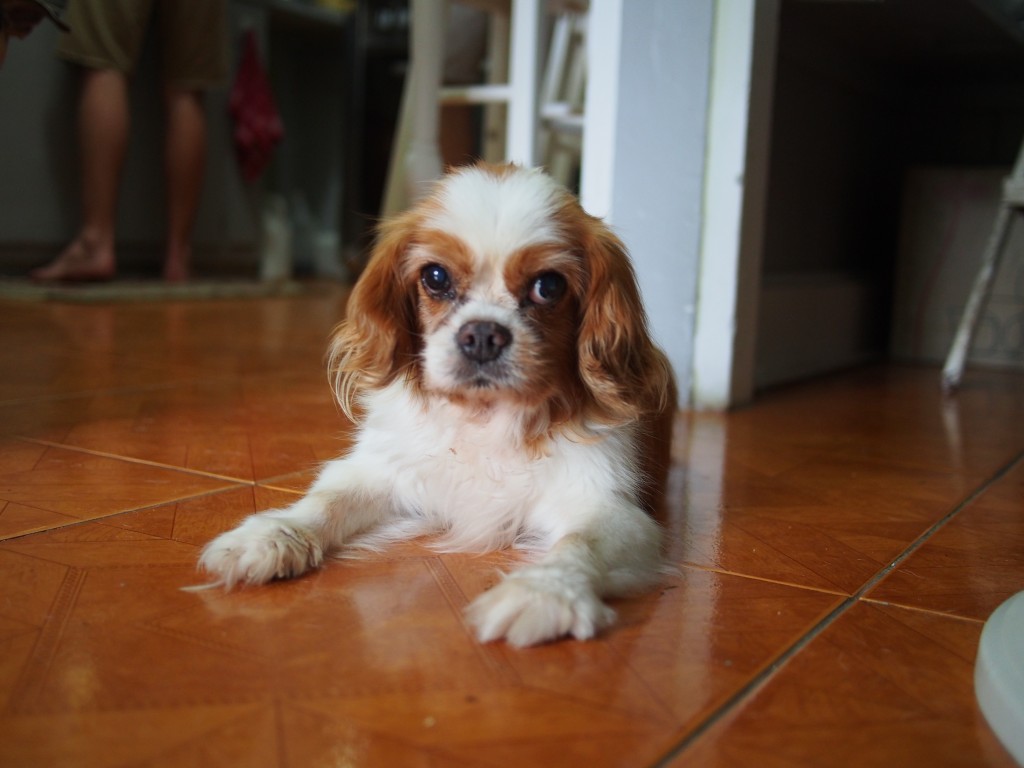 Though I helped none, over ten animals had to be taken care of at the Gamboa house sit…even this one, who barely deserved it…don’t look directly into her eyes…

It was great week of chilling out, watching tons of movies and making a few forays into the Capital to buy our tickets for the ferry and check out Panama Viejo (Old Panama) which was the original site of the city 400 or so years ago before it was ransacked by some rude European. Panama Viejo was extra cool b/c as a park right in the middle of downtown, these quite-old ruins are surrounded by modern condos and high-rises. Also a note, Panama City looks just like Miami. The skyline of Miami sits right on the water just the same as PC. With us for the weekend was a local student named Christian, who was a Panamanian from Boca and we had a few nice times together speaking only Spanish. Nice! 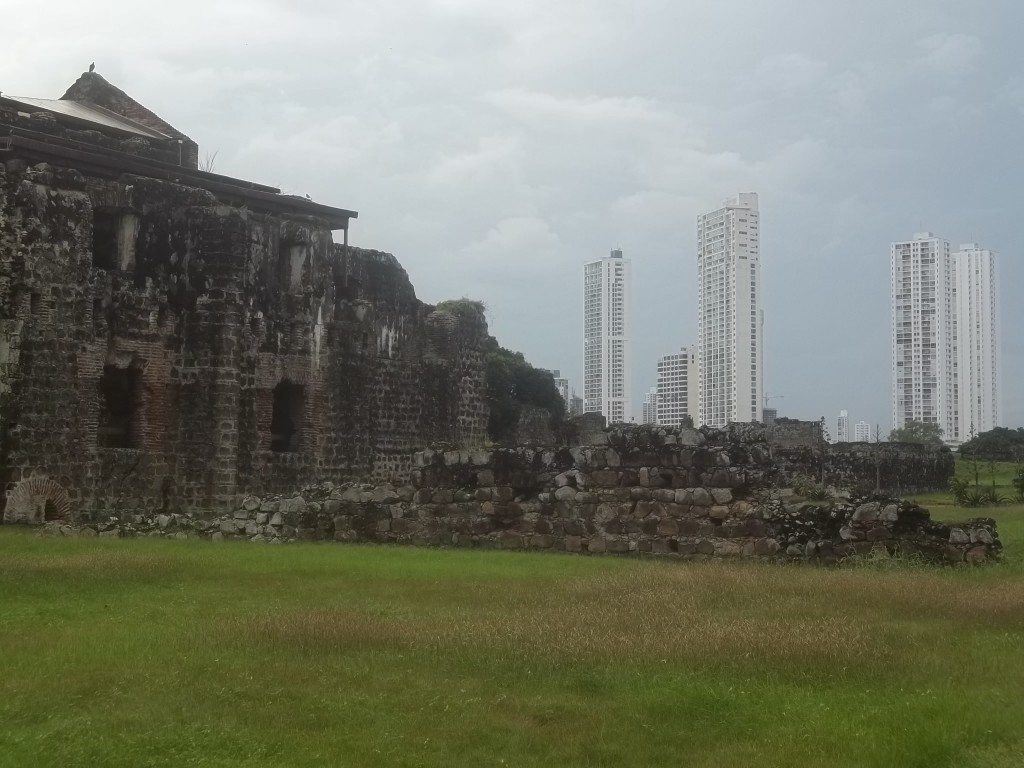 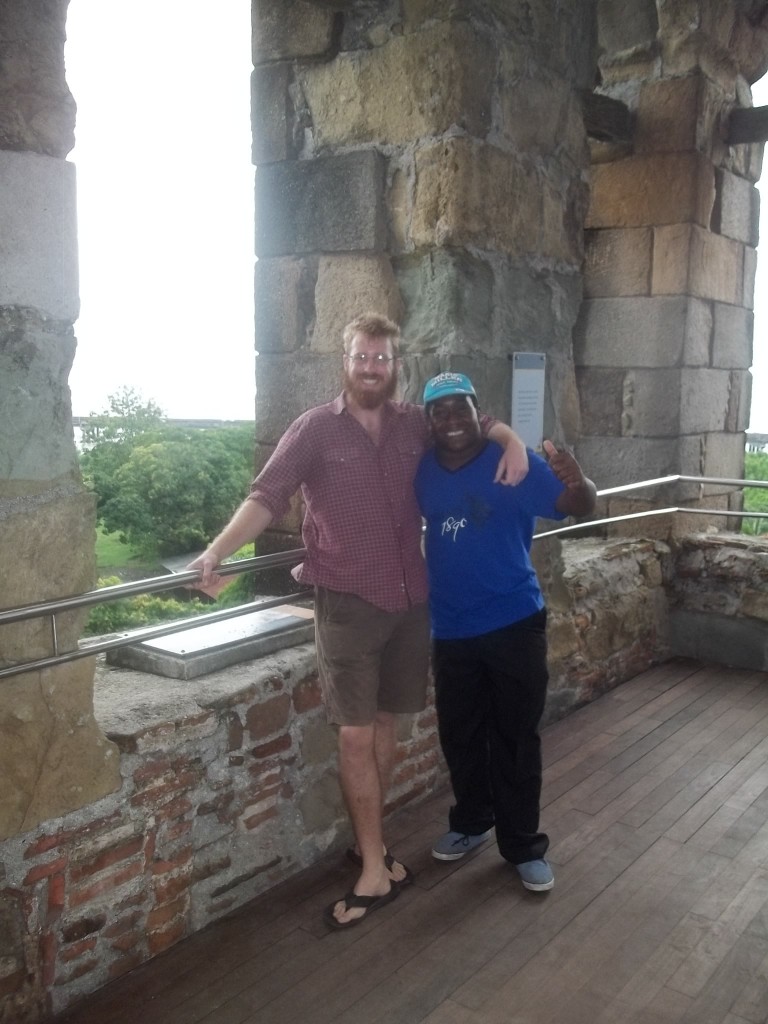 Super-Panamanian Christian and I atop a tower in Panama Viejo.

Before that Jacob and I did some nice distance in his 1982 bug. Costa Rica is quite expensive and I had always knew I might speed through it so when I found out he was of the same opinion, well, that worked out. We spent just two night in Costa Rica and might have done it in even less if not his battery had died and it needed replacing. Jacob was a good spot to drive with: into the idea of traveling and all the BS that comes with it, has a sense of humor about pretty much anything and smokes very nearly constantly. We just drove and drove, four straight days, maybe 800k? 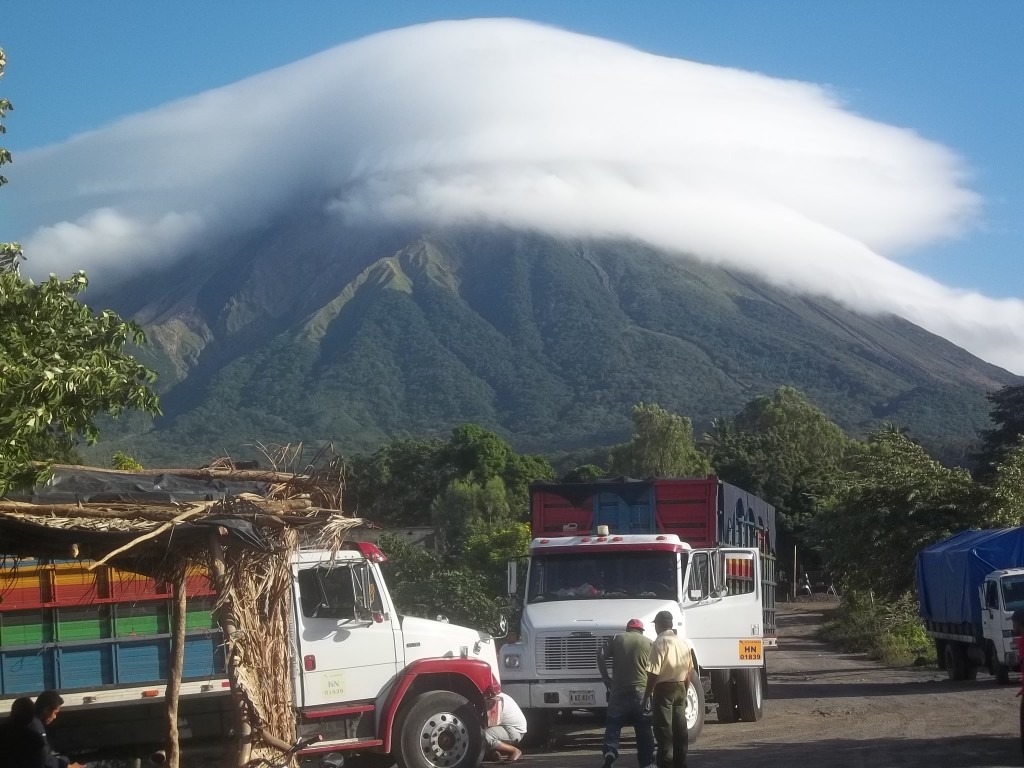 Waiting to put the Bug onto a ferry on Ometepe Island. 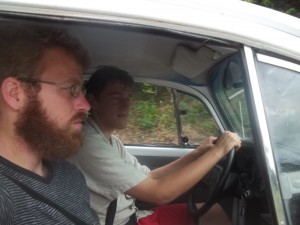 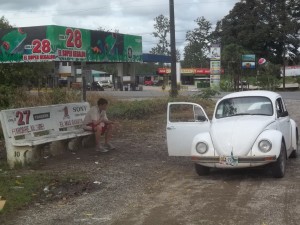 I got in the car with Jacob when I bumped into him again on the ferry out to Ometepe Island, which is a twin-volcano island making up a portion of the huge Lake Nicaragua, which according to Wiki is the largest lake in Central America and the 19th-largest lake in the world. We had been on and around the lake for the previous three weeks but we’re not there yet. Ometepe was UNNNNspolied. The only way to get there is via ferry and you can see that naturally limits development. Let’s see, I was then only with Ian and Ben and we spent three days there. I had good plans to hang out with longer and catch up with Fyfe (of Xela Spanish school fame) but couldn’t resist the urge to hop in a car and make some distance so cut my time on the island and in Nicaragua short. 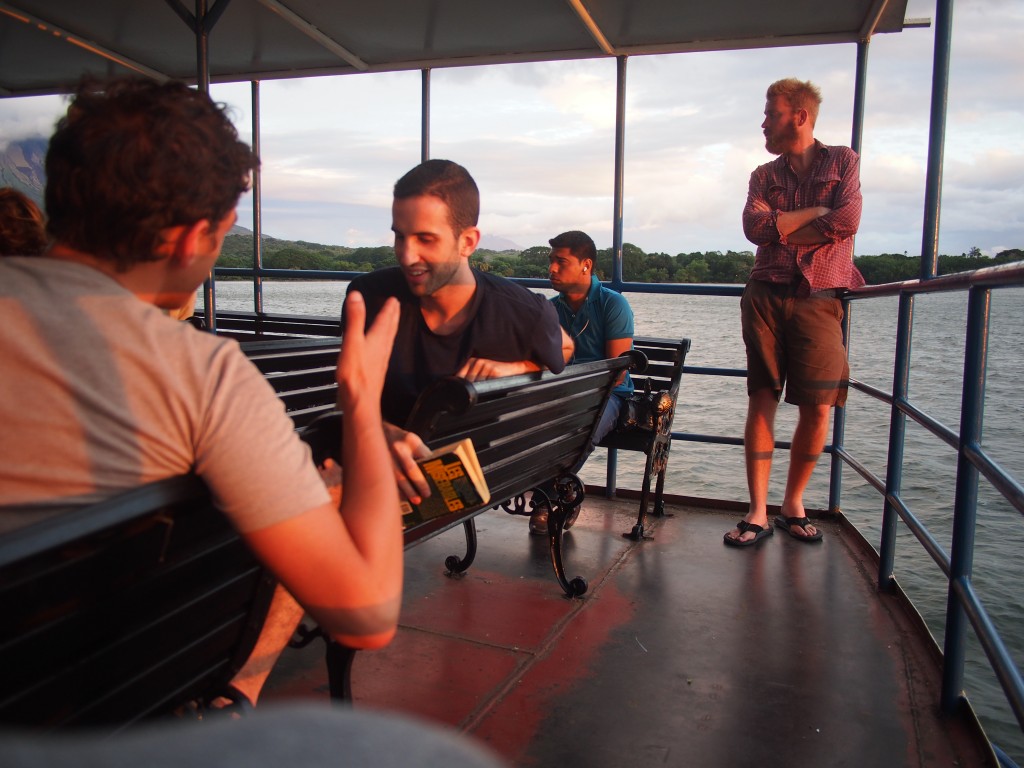 On the ferry on the way to Ometepe. Left to right, Jacob, Ben, some stoic dude and then me. 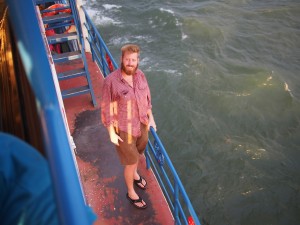 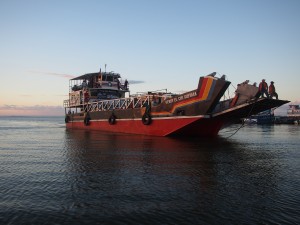 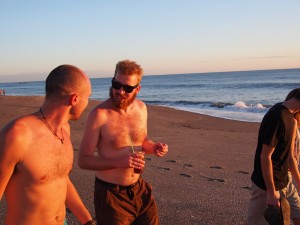 Before: Fyfe, his little bro Will, Ian, Ben, a few Dutch girls and myself bumped around different places on the Lake and north for about a week in spots like Granada-off the lake-and Leon, more up north and nice gateway to the Pacific. Good times were had by all, with I think the top spots being the Backyard Hostel in Granada and the Bigfoot on the Beach situated next to the Pacific. The pics below are from Bigfoot, which was a long, perfect, three day weekend on the Pacific. 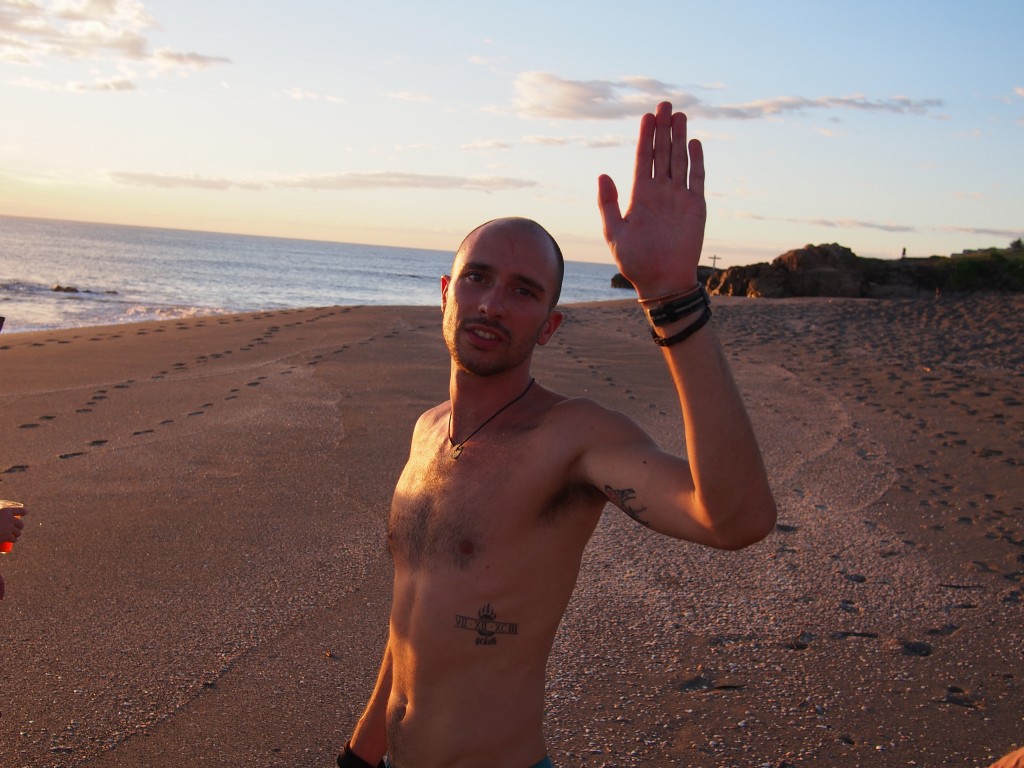 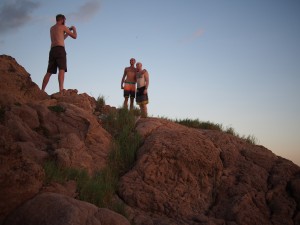 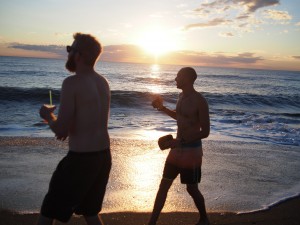 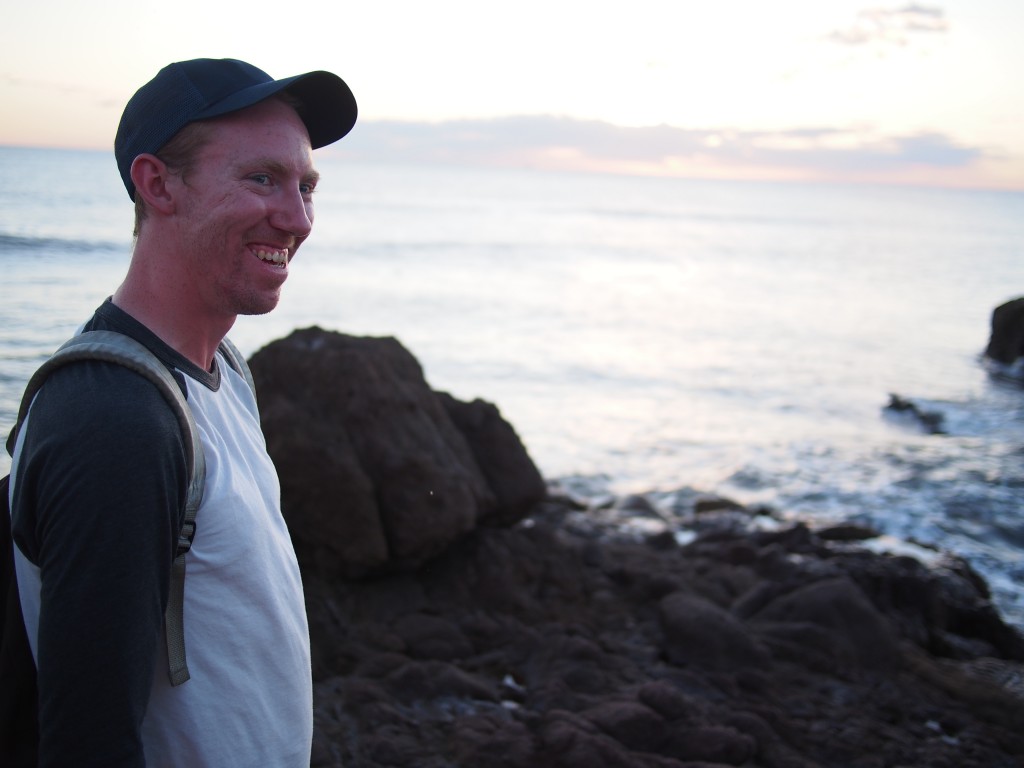 Ian, wearing my self-proclaimed dad hat, grinning off into the Pacific. 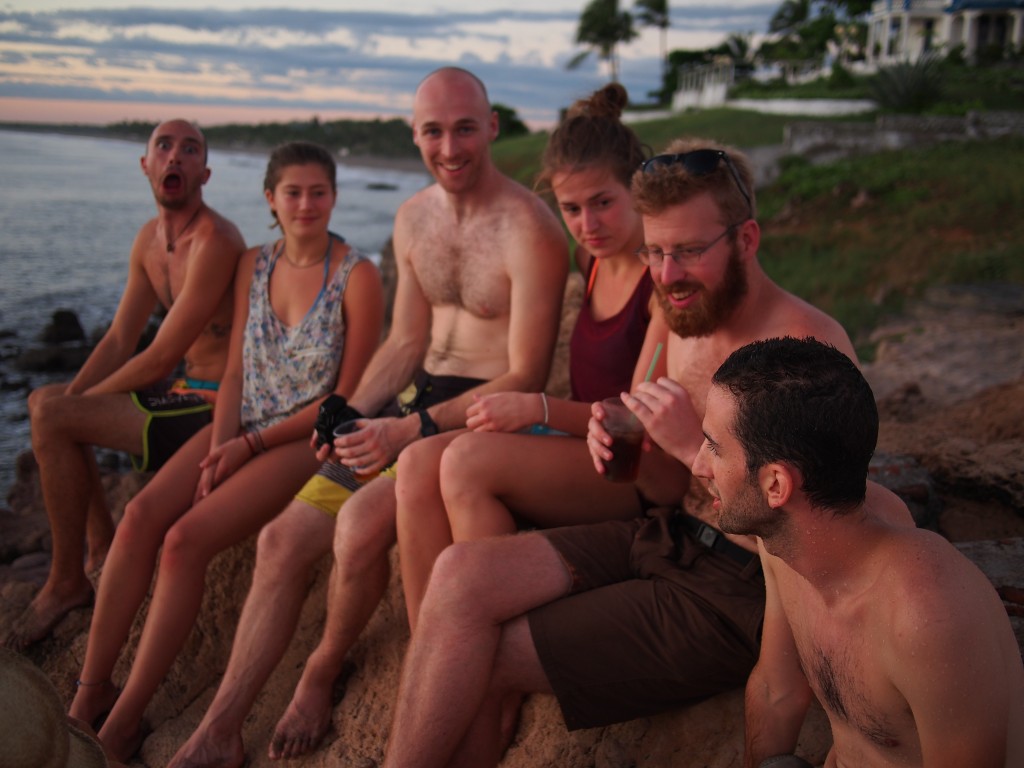 From left to right we have: Will, Fyfe’s lil bro, Mia Miss Dutch, Fyfe himself (bigtime BFF), Tessa other Miss Dutch, yours truly and Ben. Props to Will for making the picture that much better.

We’re getting closer to where we last spoke! Before this, the two Canadians, one States-ian and I took a sort-of-horrible 24 hour bus ride from Guatemala City alllll the way to Managua, the capital of Nicaragua. I maybe regret skipping through El Salvador and Honduras, but no one on the road ever told me anything to do in those countries. And then the guys I was with were skipping too. So I just went with. I was at the tail end of a bit of a sickness that had been off and on for about 2 weeks so I wasn’t able to sleep much. Something I ate riiiight around the end of the last blog post, starting right at the Todos Santos hike would return every few days to force me to bed for a full day. It kept coming back and stronger so towards my last days on the lake I went to a clinic for some medicine and it did the trick. 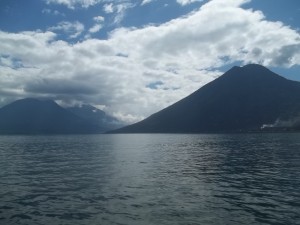 Lake Atitlan was maybe my favorite overall place of my trip and the tail end of by far my favorite country (Guatemala!). This was where I picked up Canadian Ian and States-ian Ben who you have read I fell in with for the better part of a month. Hell, Ian and I are bunk mates tonight one continent down. Lake Atitlan has three volcanoes around it and many small towns. To go from one to the other you naturally took a boat since going thru a circle is a shorter distance than following the circumference.

I stayed in a few of the towns overnight but maaaaaybe the peak of the whole trip was the five days with Michi and Yoko in Santa Cruz. It was my first experience speaking only Spanish and what a time it was. They spoke much better for sure, but since Japanese (Yoko and Michi are Japanese btw) is so far away from languages like ours, it was very easy to speak with them. We grilled out, went on hikes, compared customs of each others countries and did it all in Spanish. Seriously, I think a few English words were thrown back and forth to help a sentence take shape, but allll Spanish. Loved my time with them and always always LOVE couchsurfing when I can finally get it set up. 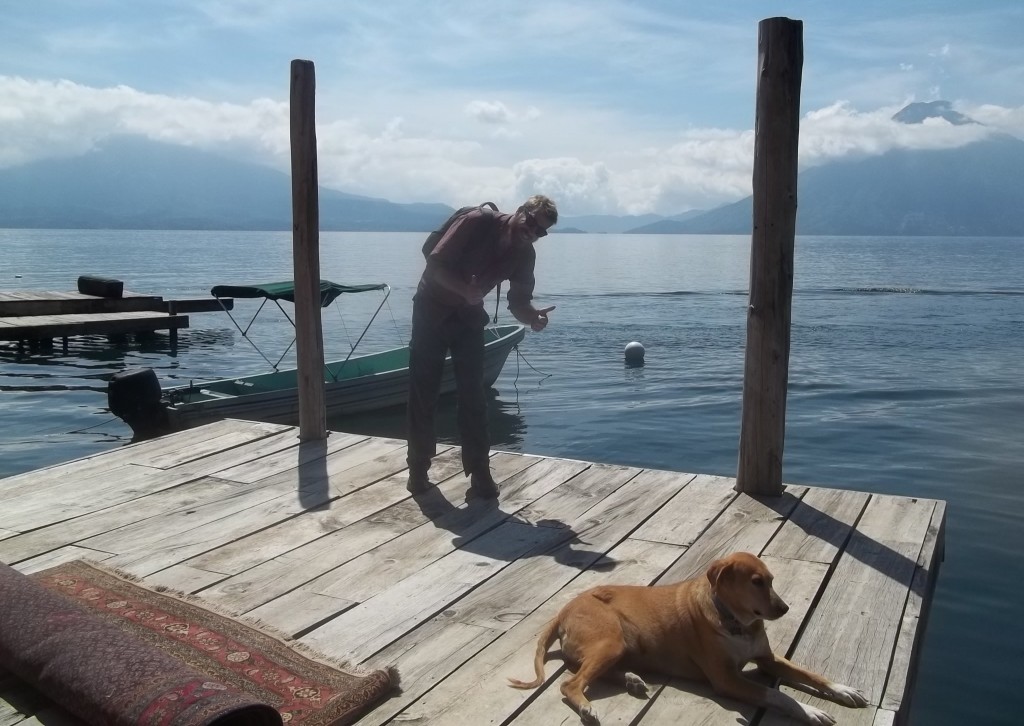 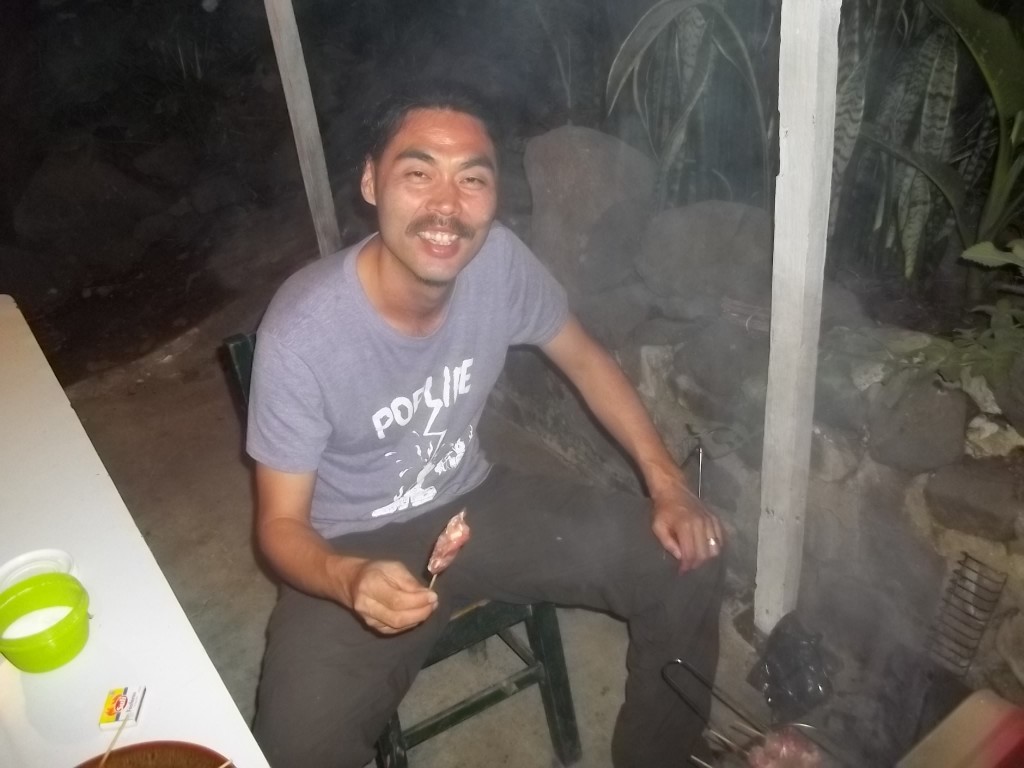 Michi in his element… 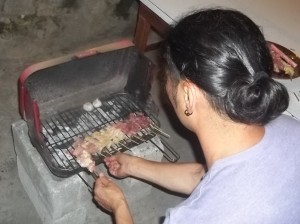 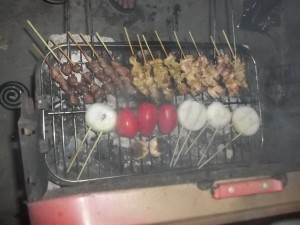 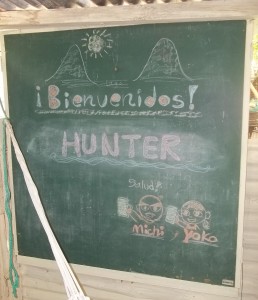 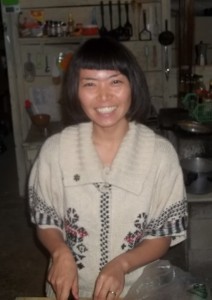 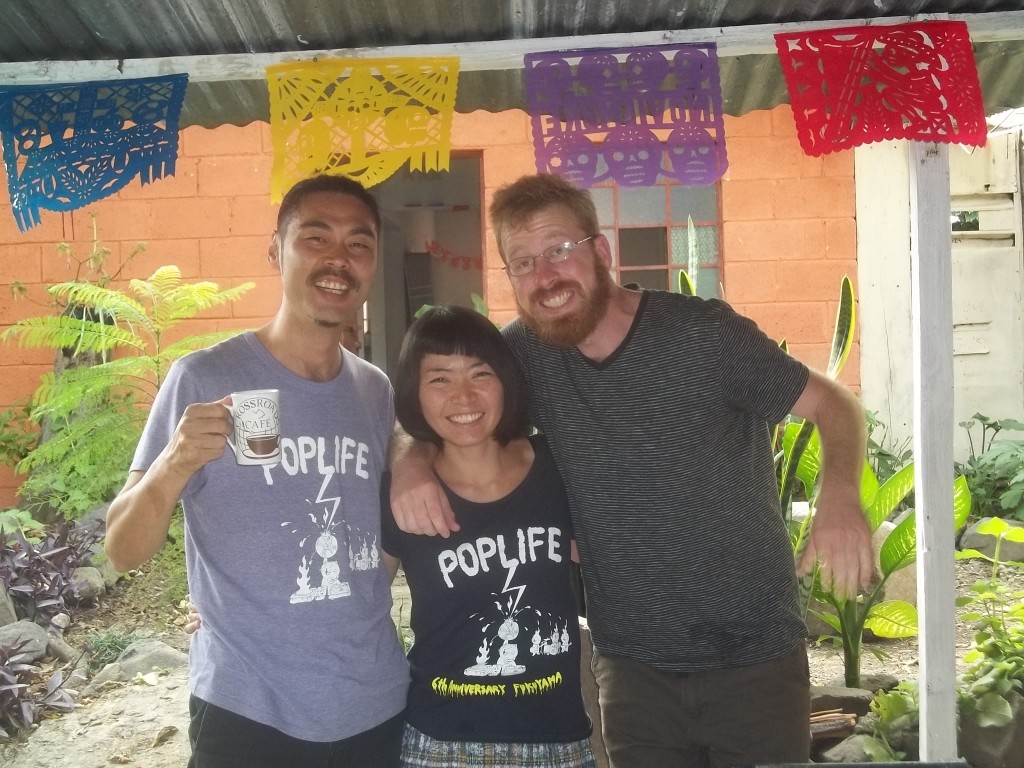 These people! Michi, Yoko and myself. Some of the best hosts out there…

That brings you up to speed! I can remember being at a restaurant next to Yoko and Mishi’s putting together the last blog post. I see maybe the next three to four weeks making my way down Colombia and thennnnn maaaaaybe I will post up somewhere in Equator (Quito is the thought right now), pay some rent and work as much as I can with my lovely insurance job and put away as much as I can. There’s talk now between my friend Blake for him coming down and living with me, since he works a distance job too, but it’s only talk right now. More, my boss won’t really know what she can give me until the busy season actually comes so we’ll just have to see what happens. 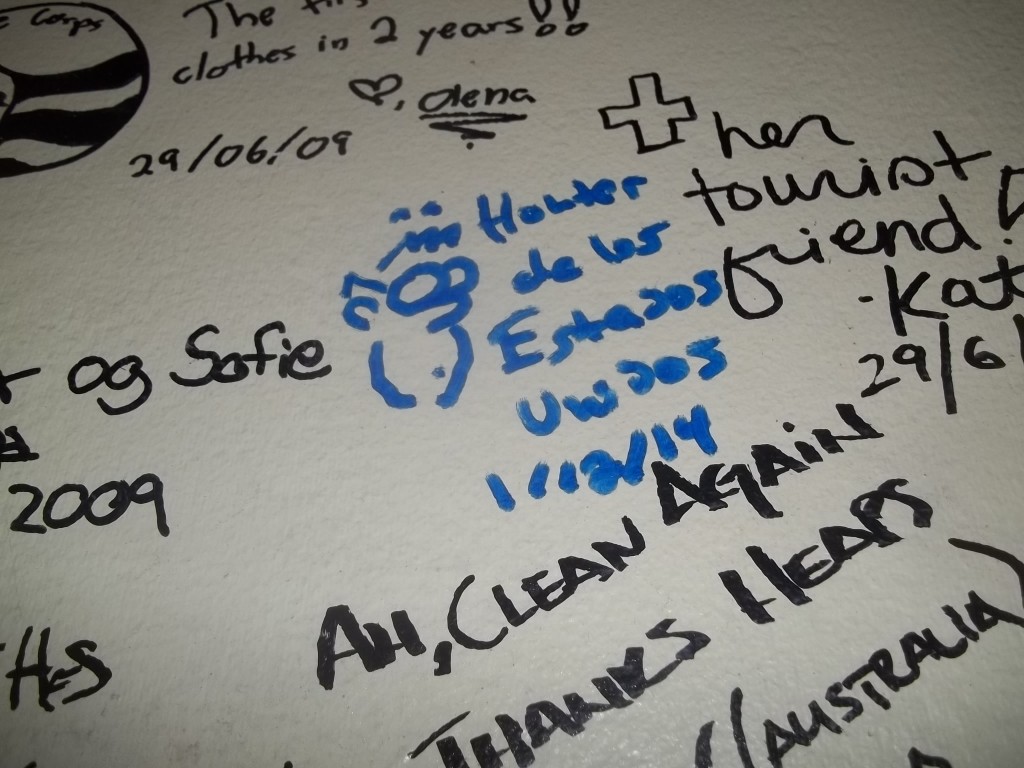 That’s it! If you read this far you get 6 months waived off your purgatory sentence!

Alsooooo go subscribe to the subscription link towards the top right of the page, I thiiiiiiink I finally got it working.