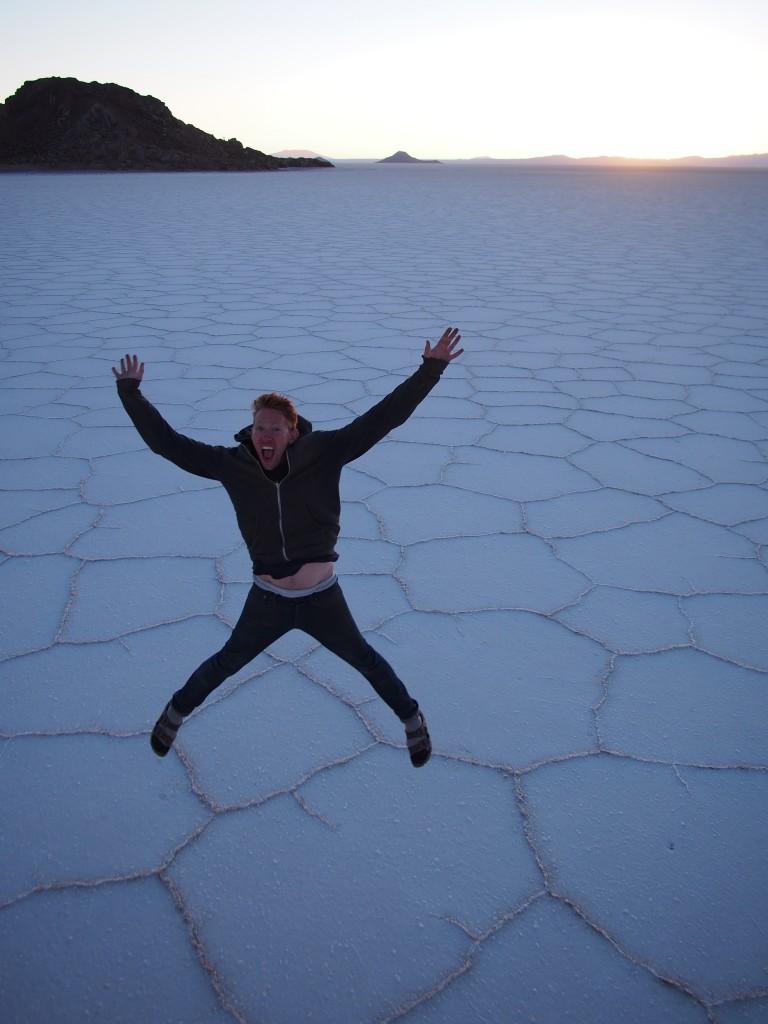 It took a long time to get into Bolivia. Four times we tried to make that climb before we actually got our passports stamped in. When we last sat down and chatted there were some problems with the van, and that wasn’t the tip of the iceberg, but probably at least half of it.

Last stop in Chile was San Pedro de Atacama, a touristy little blah place where people go to snowboard down sand dunes and stuff. The border cross in Bolivia involves quite a climb, a thousand meters, probably more because I don’t really know what a meter is. After a few days in the aforementioned town, going over some tune-ups for the Delica, we’re ready for Bolivia. We actually get up and pop into the migracíon. But there’s some paperwork we don’t have, which we need for the van to cross. In retrospect, and advice for you travelers, we should have just sat there and waited him out. He would have eventually let us through. Hindsight can see for miles. Anyway, we drive the 60k back down the mountain-side and are told we don’t need the form, it’s for Chilean vehicles only.

Now we’re gonna wait him out. But we break down on the way, head gasket. That was a Sunday afternoon and we get that fixed by the following Saturday. Some stuff is still weird, and we wait until Monday (9 days late) to try again. This time the engine is too hot going up the mountain, so we super regretfully make our down again and head to a town for good coolant. The next day, we drive wow-slow up the mountain and finally get our stamps. Fourth time is the charm and I have six (6!) Chileans entry/exit stamps.

The whole experience was super gross, but it’s over, we’re in Bolivia and the van is doing good. The van issues and the length of time involved didn’t help my already somewhat negative opinion of Chile, and I will likely not be going back and convincing others to do the same. Chile: very closed culture that doesn’t take well to outsiders (though mostly Bolivians, Peruvians and Chileans with dark skin), their Spanish is miles away from any anyone else in Latin American, the country is super far from yours and is quite modern. This may sound nice, but why leave the States if malls is what you want. Also, it’s SOOOO expensive. Go anywhere else in Latin America.

Bolivia is immediately more my style. People are much more humble here and don’t think they’re better than anyone. We cross into the border in the south of the country and ride through a a few days of pretty isolated stuff. We pass lakes of weird colors, flamingos and seagulls in incredibly cold climates and plenty of touring vans I’m really glad not to be a part of. 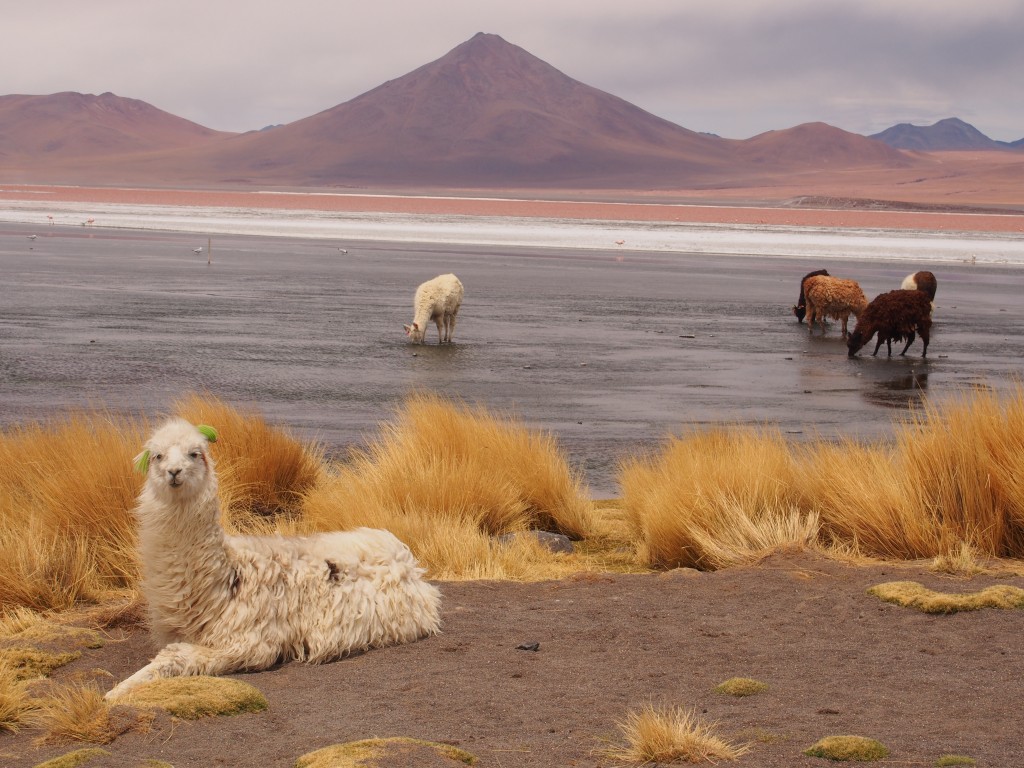 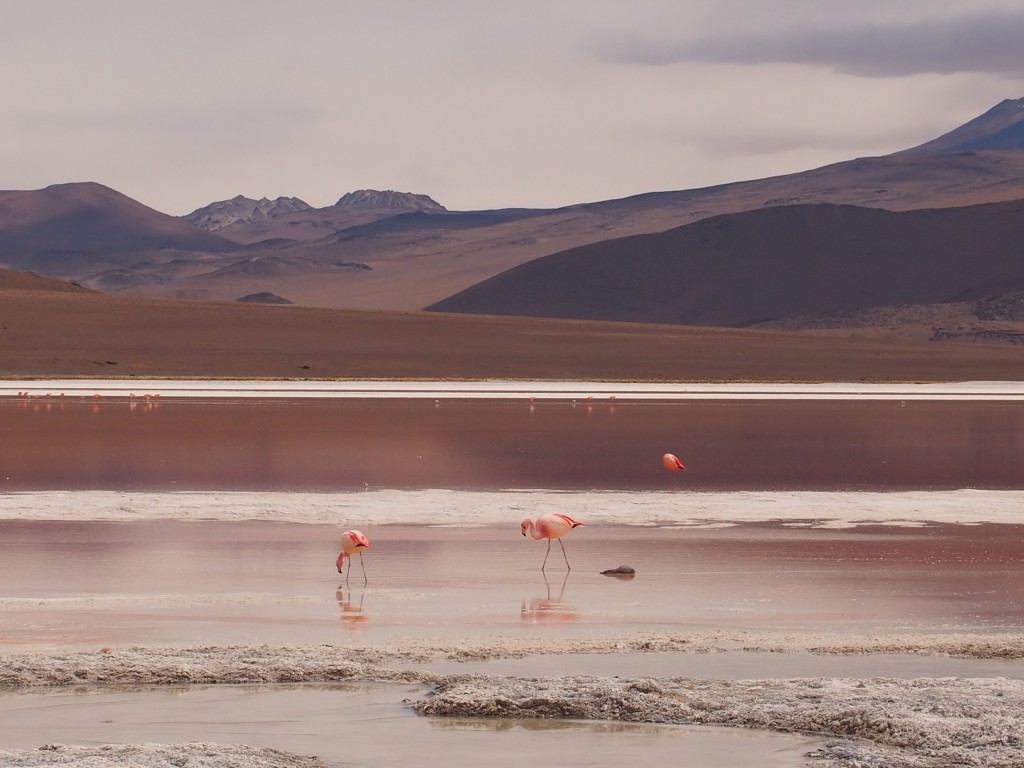 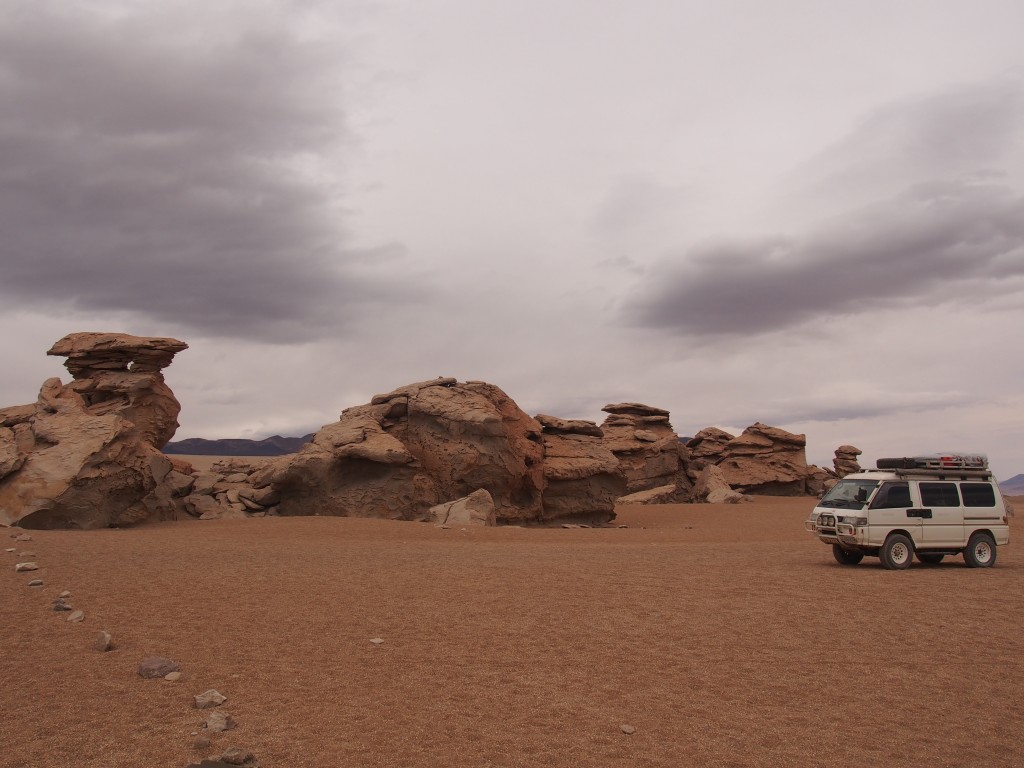 Also, hours after we get up the hill, recibimos los estampas de entrar a Bolivia, and the vibe is killer, finally, but, wait for it, the back hatch won’t open. This cuts off ALL of our food and water. Bit of a van flaw. Luckily, I had pulled out a few veggies/pasta and the oven before our fate was sealed, so we survived a few days on “freshman-year-in-college” type-meals. Maybe day four Ian figures it out and the latch magically pops open.

Now we get to embark on the Salar de Uyuni, which are massive salt flats and undoubtedly one of Bolivia’s biggest attractions. All over San Pedro were tour companies that went out everyday to the salt flats and back, and we saw plenty of black spots in the distance—other tours vans—zipping across the horizon. The tours seem fun, but doing your own thing in the van is way better. Check out this video van tour whilst on the salt flat.

Never was awesomeness so completely featureless:

It was rumored to get insanely cold at night (blogs boasted 0°C) but we found some spots next to the few islands on the salt flats and had some of our more comfortable nights in the van.

This is the largest salt flat in the world and formed by the transformation of several prehistoric lakes. It contains 50-70% of the worlds lithium reserves and because of it’s near-exact flatness, it’s used to calibrate satellites. You’ll have to check out that link above if you want that explained more.

But then! GPS positioning proved that the Salar (salt lake in Spanish) isn’t actually fully flat and has several ridges and hills millimeters in height. ha! 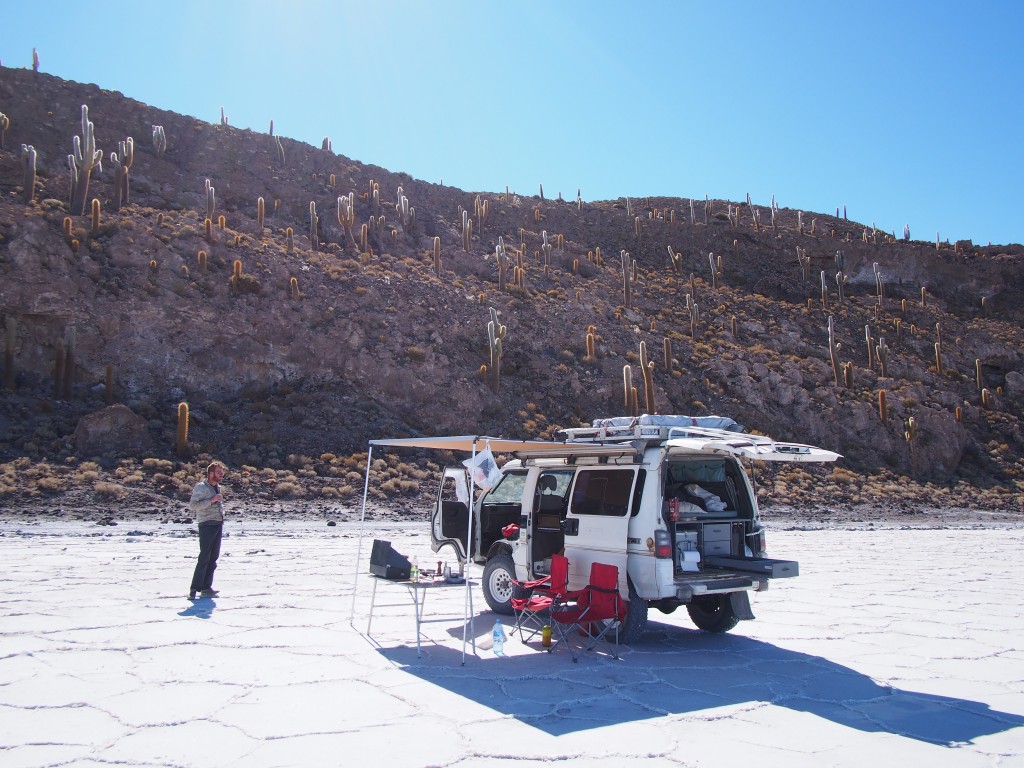 All is good. Cramped, filthy, but totally autonomous. It’s really nice to finally not have to worry about where to put my stuff, where I am going to sleep and what the heck I am going to eat. When you normally live out of two backpacks, these three points can be a huge headache. The van is (despite being as inconspicuous as eleven elephants) quite secure and I don’t worry about leaving my stuff in it. We, as you saw in the video, sleep right out of the back and have tons of good food that we cook right up.

But privacy is a thing of the past. Steady readers of this blog (all three and a half of you) will remember Canadian superstar Ian Graham from Guatemala/Nicaragua/Panama exploits of last year. If you’re just catching up, he is the captain of this ship. We get along well, but that is put to the test every so often. We spend, very nearly every moment together. You saw the awkwardly small space we both sleep in, which has been every night where I sleep since he picked me up almost two months ago. I fall asleep and homeboy is inches away and naturally hasn’t moved when I awake. He’s right next to me in the driver’s seat right now.

There’s been a few small arguments, but so far (from my end) the vibe has been quite nice. We both share a love for simple bachelor meals cooked exactly the same night after night, cheap beer, The Far Side and watching ten movies a week. I imagine this is a nice exercise for someday being married, if that ever happens. 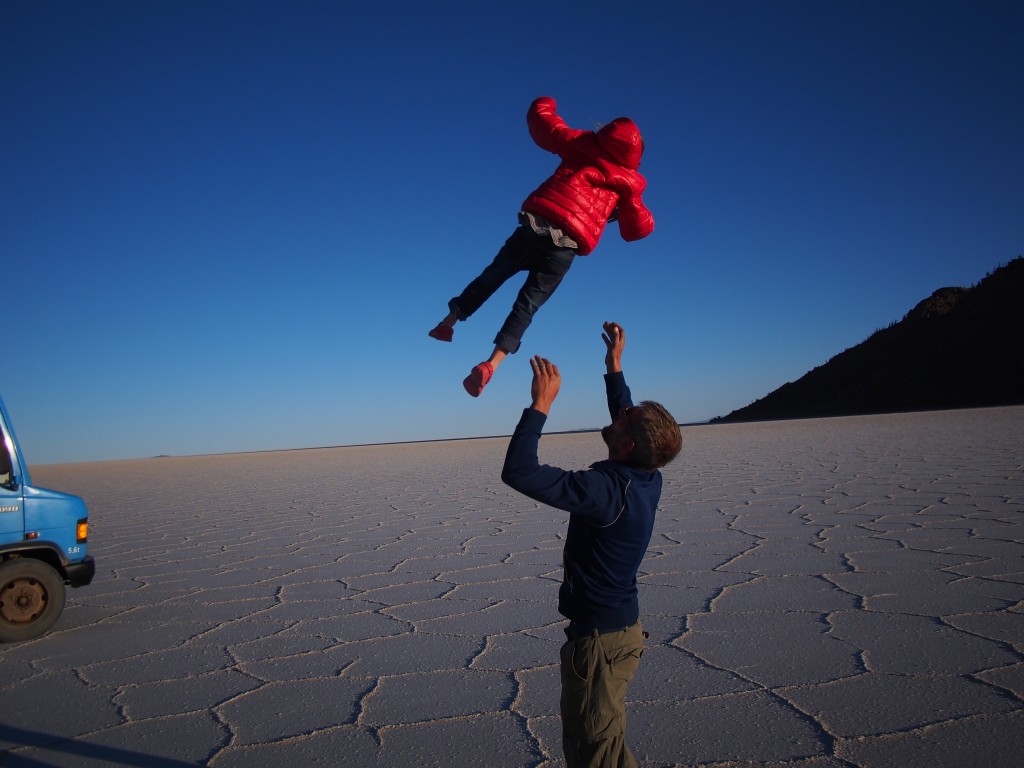 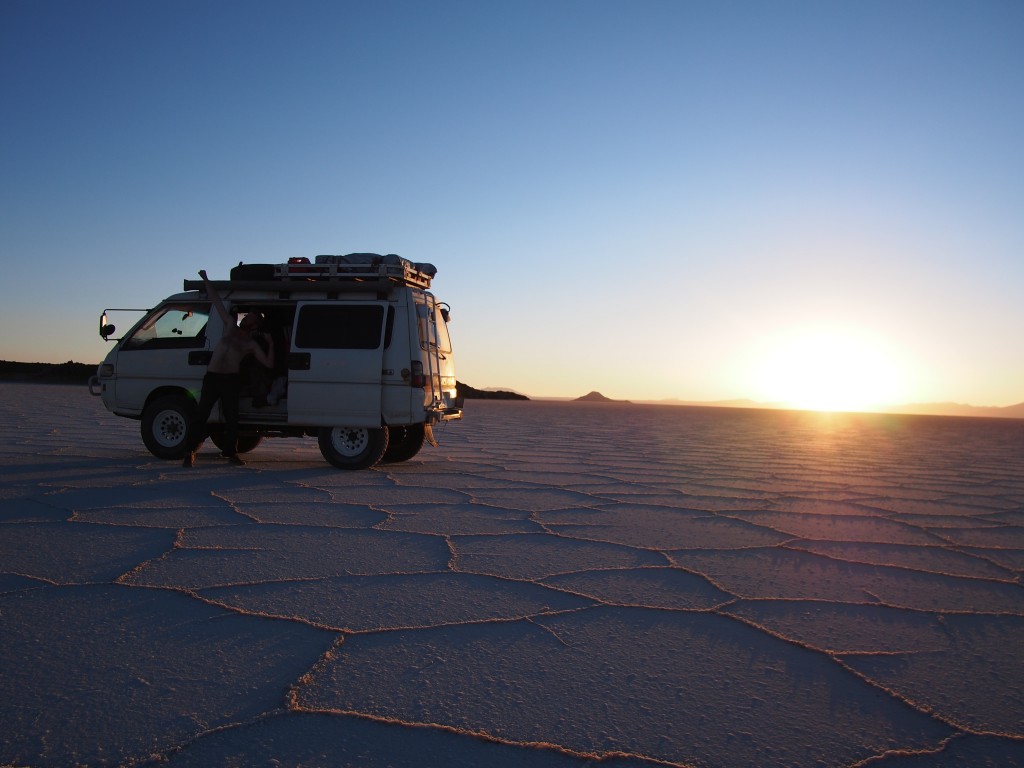 If you squint, you can see me posing shirtless. If you want to squint and see that kind of thing…

That’s all for now. We took a week off from the road to take some Spanish lessons in Sucre, Bolivia before heading to the Bolivian Amazon. Within a month I will be back in Mexico where only-brother extraordinaire Brote will be joining me for a nice weekend. I will spend the last month in Mexico where all this madness started well over a year now before taking a flight myself back to Tampa for Hunter 2.0 in ’16. 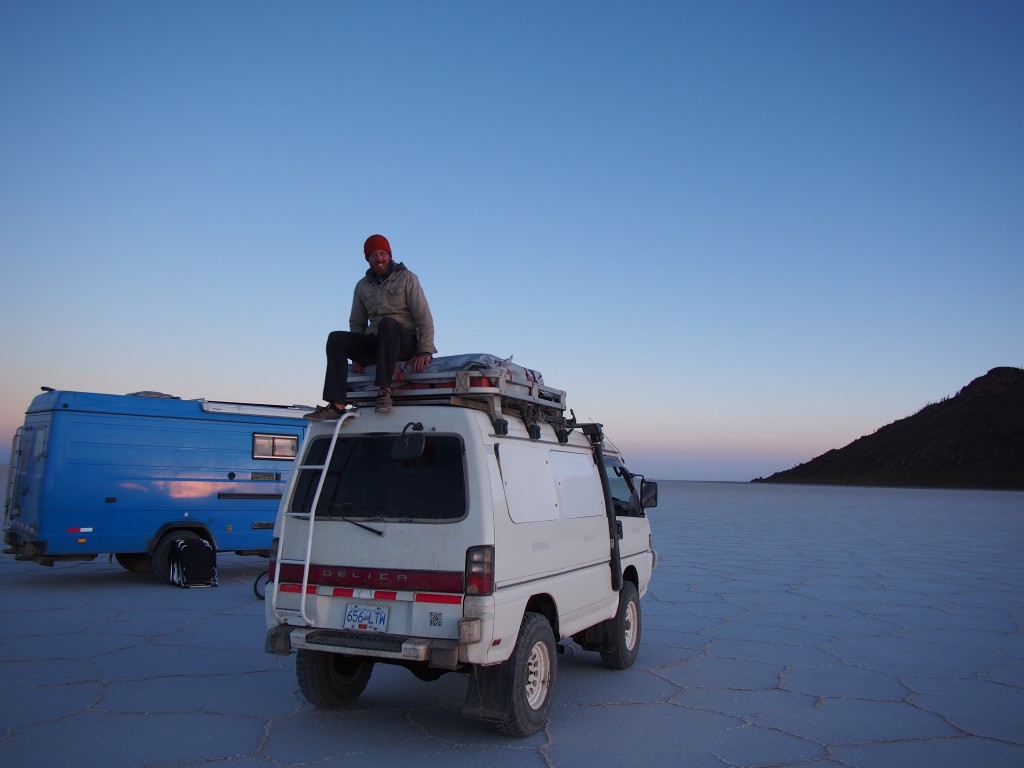 I will leave you with something mothers everywhere would approve of, mine especially.