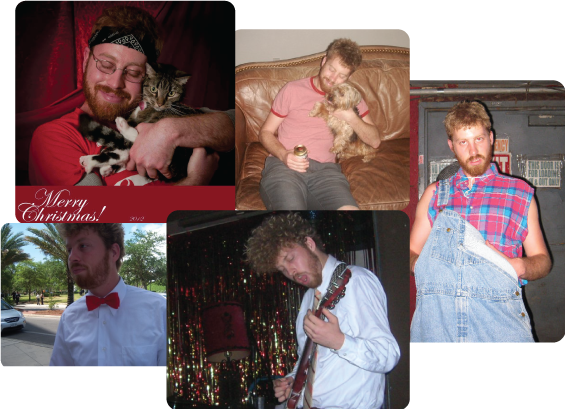 So I can’t imagine anyone I don’t know reading this blog, but I will put a little “About” section in here b/c they pound it into you’re head while in design school. Though, I fear, like the 5 paragraph idea that we’re taught to do early but later pushed away from, the standard 5 links isn’t all that important.

Anyway, up until about a year ago I was working towards a BA in Web Design at the Art Institute of Austin and realized after about a year of classes all the coding I was learning was by myself, troubleshooting w/projects at home. A few (and I mean just a few) of the classes were pretty slick, but the majority of them were horrible. We learned nothing, and I was bored. So put together a portfolio and starting applying for jobs. Still looking, I thought it might be a better use of my time to get an internship than continue school. I already have a Bachelors Degree, so that’s there. After two plain boring internships and no luck w/jobs I hit a serious wall w/web design. I don’t even really like computers, much less coding all that much, which I always knew, deep down. But the jobs were there I said. And kept saying it to ignore what I didn’t like, which the human mind is pretty good at.

I could write one long-ass blog post about what happen next but I won’t. I was kind of depressed, needed a change, and needed to get out. So I sold most of my belongings and hit the road. I continue to work my insurance gig (which I love to complain about, but it’s a nice paycheck and as flexible as they come) for cash and do the HelpX around the US.

I know I like to write, be outside and for the time being do not care one bit about money. It’s just me, I have no debt and don’t need any more possessions. So why do I need to save up a bunch of money? I’ve met a lot of happy people in this world and it does not seem much like income had much to do w/it. I know I will need a little money if kids come into the picture someday, but I don’t feel like the kind of person who needs a lot of it to be happy.

Most of the time one can just decide to be happy and it comes.

More to come as always. See you out there!