So the last post I mentioned it was going to be short due to the shortest gig thus far. Then it ended up being the longest post. Things like that happen to me a lot. This stay was mini compared to the rest though. Not even a full week. And as expected, it didn’t lack excitement in the least.

My next set of BFFs was the kindly folks of the Blades Homestead, aka Adria, Josh and the handsome twin-baby superstars of Arlen and Ewan. These are friends of the post-before-last Hunter Homestead. Those past hosts took me on a choice beach trip to the Pacific and these new hosts were their friends who met us there. I brought up I was interested in coming to stay, since I knew they were interested in hosting and the rest fell into place:) Their property hosts a huge garden and I had the privilege of occupying a tent overnight in the thick of it all. Slept like a baby. 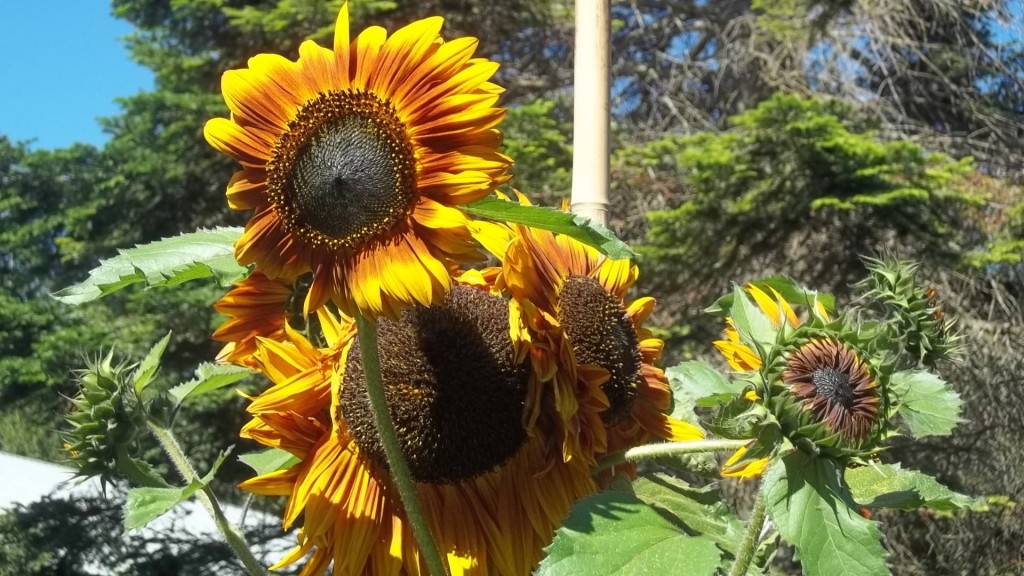 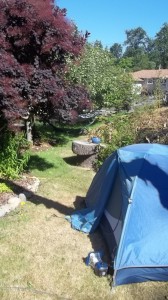 Adria is a photographer and Josh runs a landscaping business around Victoria. There was a framed picture I noticed of a radiant/pregnant Kirsten Hunter hung up at the Hunter Homestead and I found out that Adria took the picture. I like things like that. Full circle stuff…it makes the world go ’round, no?.

Josh runs what seems like to me a dream job. He works outside everyday (check), is his own boss (check check) and gets to exercise some creativity while helping the world grow (fat check). He has two employees and I had the pleasure of working w/one of them for an afternoon. Josh is really easy/fun to be around, so it shouldn’t have been a surprise that his employee was too. Sebastian and I were joking around w/each right away and shared a lot of similar experiences in college (Canadians only use the word college to talk about what we think of as a technical college. They say say “university” when we say college) and life thereafter. Paralleled vices/virtues.

My work here was around-the-house/garden help. The real noteworthy project was the tire-made stairs we spent about two days completing. I had the only hand in day one, using the coveted b-day Ipod mix to push me thru 7 hours of in-the-sun labour. I did this on my own volition of course, sometime you just get into projects and have to finish it! Day two was led by Josh, who had great ideas to add tiers up the sides of the hill, thus flattening portions of land so he could put in some plants. It looked pretty slick I must say. 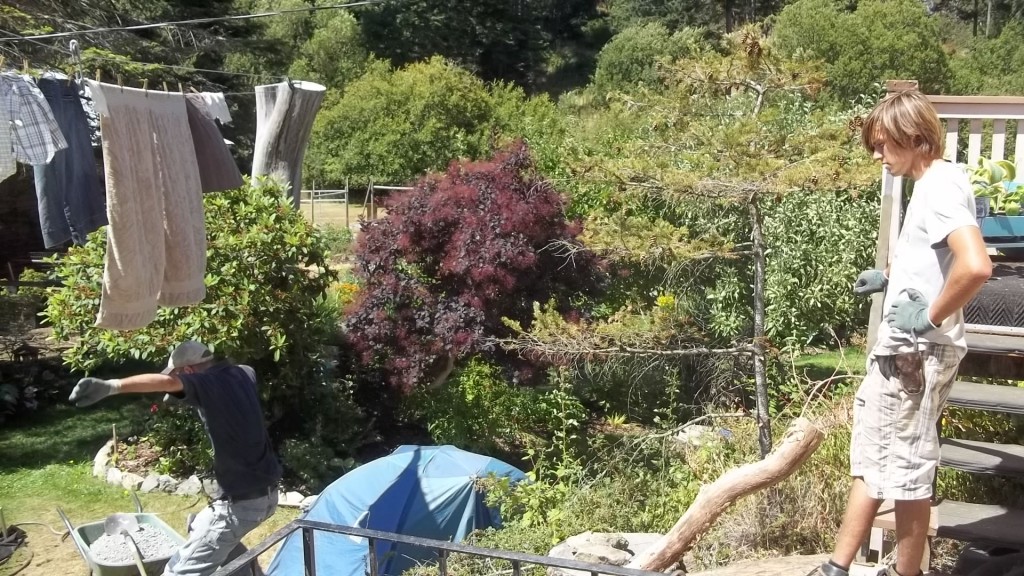 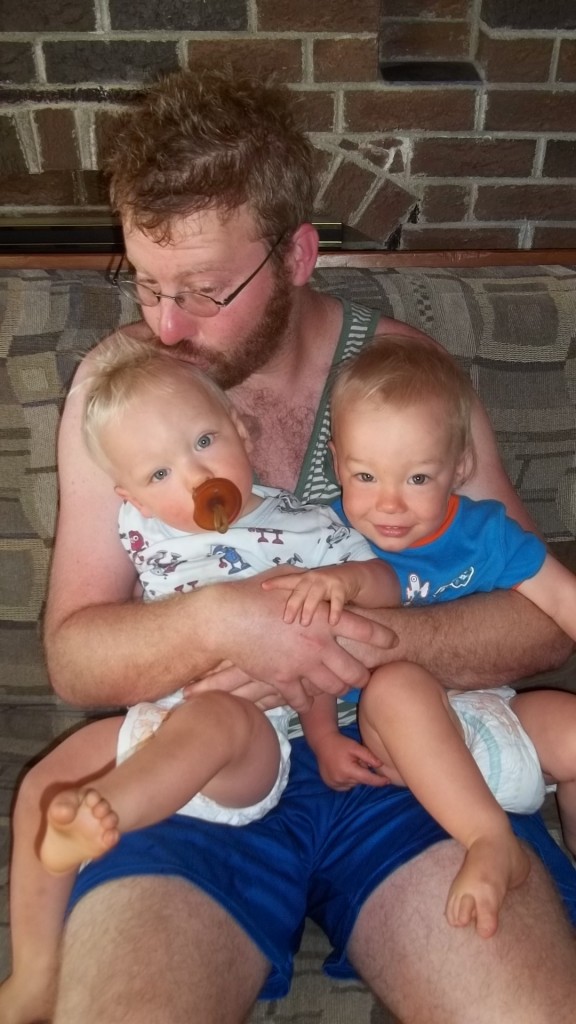 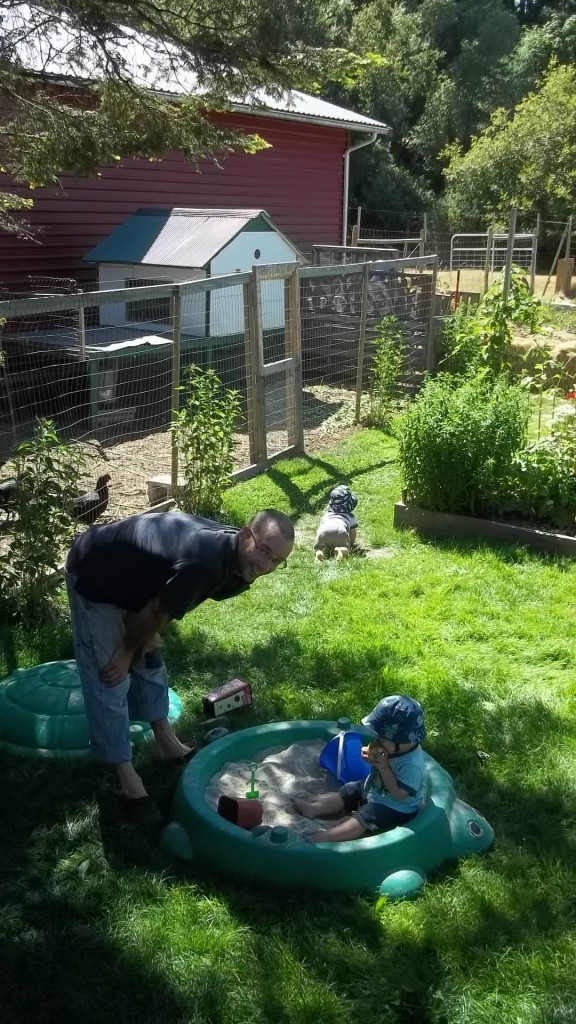 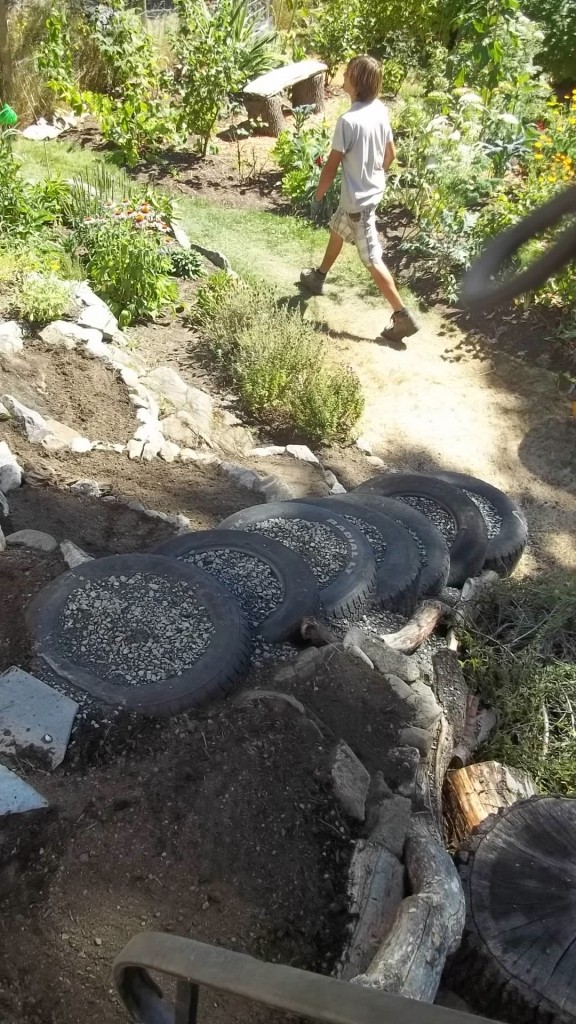 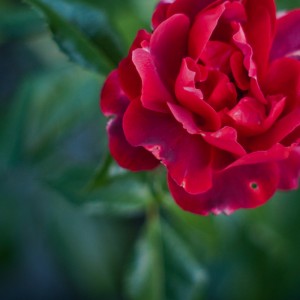 Thanks to Adria for contributing some of her work of the Blades’ garden. Photo credit to the left. Check out her work sometime.

Now I am in Seattle w/the great Cameron Hypes until Monday, when I will pick up momma Keyne in Spokane, WA, and head to Kooskia, ID, for a week of farm fun. This will be her first time to the West and her…57th b-day is this Saturday:) Can you believe I talked her into coming way out here? The Stanford-family adventure starts tomorrow!

I miss all my friends in Texas, Florida, New York, Colorado and elsewhere further.

The Biggest Leg yet…

In an effort to get north fast, I’m going to stay with a family in Bellingham, WH. They do a lot of sailing, live right on the water, and sound pretty nice over the phone. Check, check and check. My rationale for all this driving is wanting to explore Canada some, but not wanting to do so late in the year. I’m not (more importantly, my car isn’t) ready to be that far north around November and December. 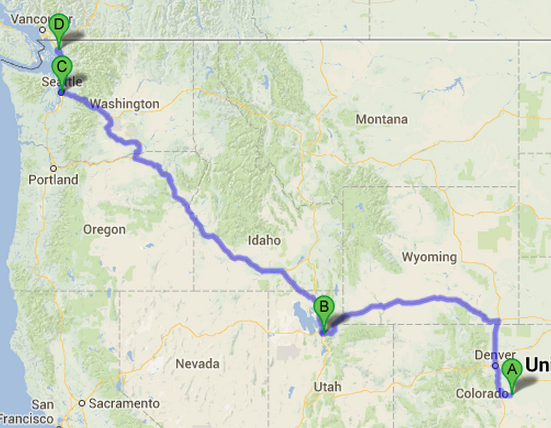 I need to be heading south again towards the end of the year, and seeing as it’s already almost half way through June (of ’13, seriously when did that happen?) I pushed through by far the longest single drive I’ve done so far. From Ellicott, CO, where I was, through Salt Lake City, UT, onto Seattle then into Bellingham, WH, my final destination. This was 1,553 miles, about 24 hours of actual driving time, and completed in three legs over the course of a few days, each being in between the letters to the left. This was five new states I’ve yet to visit and connected with some old friends.

All my drives are done at night. Both longer legs were started in the evening and completed the following afternoon. Nothing super exciting happened over the drives (except me not getting in a wreck and dying, which I think is pretty sweet) but driving by myself for 8-hour legs is getting easier all the time.

I generally think saying things like, “The road is a funny place” is a really gross thing to put on paper, so I won’t. But in those long long legs in the middle of the night, when of course the only stations coming in the FM are country, and when of course your CD player is on strike for whatever reason, something is talking to you. Not really in words you and I speak, but more of a weird vibe pumped through some spiritual IV.

When you have nothing to listen to and only a very boring task (not hurling your car off the cliff six feet to the left) to complete, you just start going through everything in your mind. Your to-do lists are revised until you convince yourself none of it even needs to get done anyway. You run through all these different fantasies because you have the time to. When else, besides on the phone with your parents, do you have tons of time to zone out and contemplate just about everything.

It washes you out, sort of shakes the spiders out from the spaces besides your brain.

“Uncle Ed” as he’s so called in certain circles of the Kennedy family, was nice enough to put me up at his quite-fabulous Salt Lake City estate. I’ve met him once, at a family reunion, but I don’t remember. He’s closest to the Steevers and we spent our evening driving to some of the choice skiing hotspots of Salt Lake, though it wasn’t quite the right time of year. 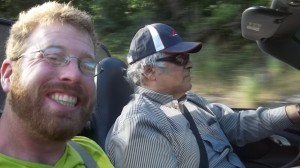 He drove like a race car driver with something to prove and confirmed my suspicions the Utah drivers are of a tougher cut than, at least I. Literally, in that state, every one was passing me all time. Maybe when you learn to drive in a state with a disproportionately high number of elderly, you just drive like one anyway. Hard to unlearn methinks.

Also, earlier in the day I drove out to the Great Salt Lake, which I highly recommend you not do if you’re in the area. It has a smell that puts the Bay of Tampa to shame. It’s the second saltiest body of water in the world, which peaks it at about 7 times saltier than the ocean. I was sticky for days, don’t go. 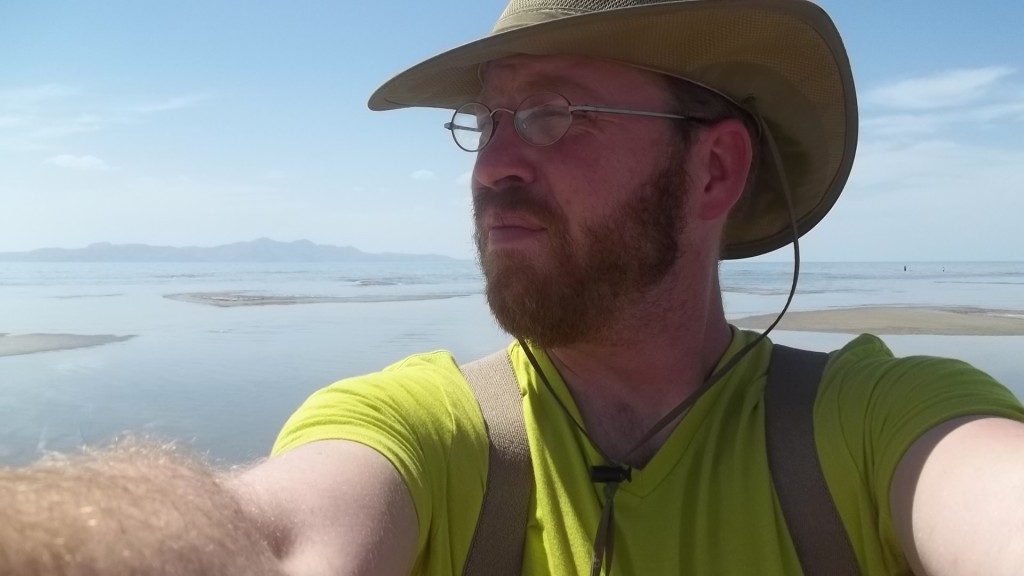 The Great Salt Lake. I went so you don’t have to.

Also, the library in Salt Lake city is one that puts all others I’ve seen (I’m talking to you Washington DC) to utter shame. I took a bunch of pictures of it, but you could imagine. I stayed with Ed just long enough on Wednesday to complete my TSLCI work before hitting my longest leg, Salt Lake to Seattle, about 13 hours.

It went really well as a whole. It’s pretty amazing how actually getting a good nights sleep helps out so much. Only then end was rough. Through some weird cosmic event, I rolled right into Seattle in rush-hour traffic and my (lovely, always has my back) GPS took me right through downtown, even though I later figure out we could have just stayed on the highway and gotten off later. It’s funny now, but for about 30 minutes I was flipping out in the car. It was the end of maybe 17 hours of driving and some sleeping too. 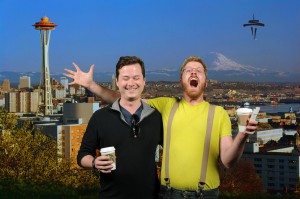 But I finally got a to Cameron’s house! This guy I haven’t seen since the Plant High days, and we haven’t hung out since our glory days of underclassman. This was my first really good friend in life, and though our time chilling was brief, we had some good times. I can’t believe I was biking around South Tampa with this cat maybe 12 years ago. Essh I’m getting old.

The rest of the Seattle trip was pretty standard. Spent waaaaaay too much money on drinks, I dragged Cameron up to the Space Needle and went to the famous marketplace. 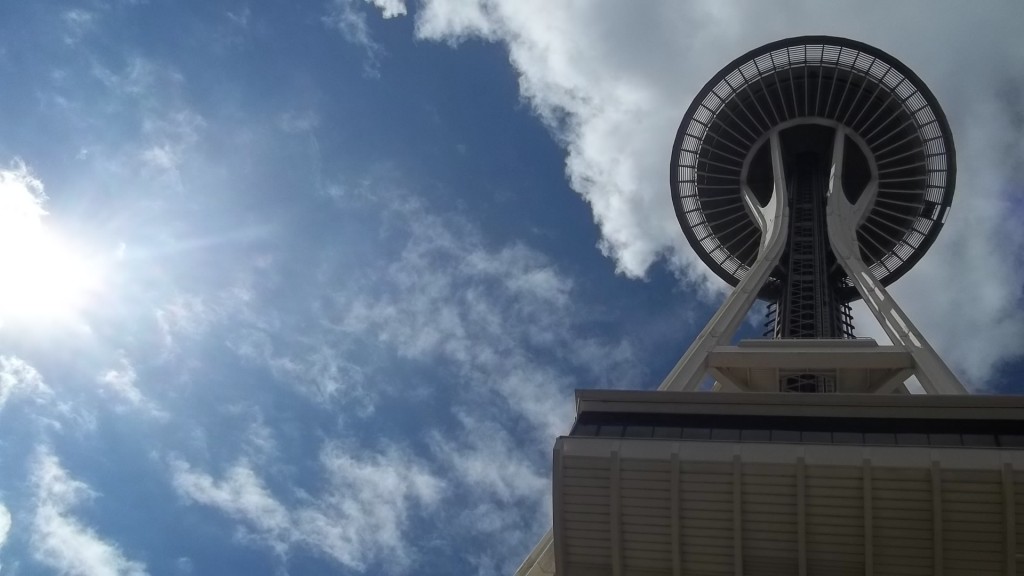 So I just got to my current gig this afternoon. Bellingham, WH, with John and Katrina, who live right off Samish Lake and promise tons of sailing while I’m here, which looks like it will be about two weeks or so. This is my fourth set of strangers to stay with and I think it’s going to work out real well. More to come! 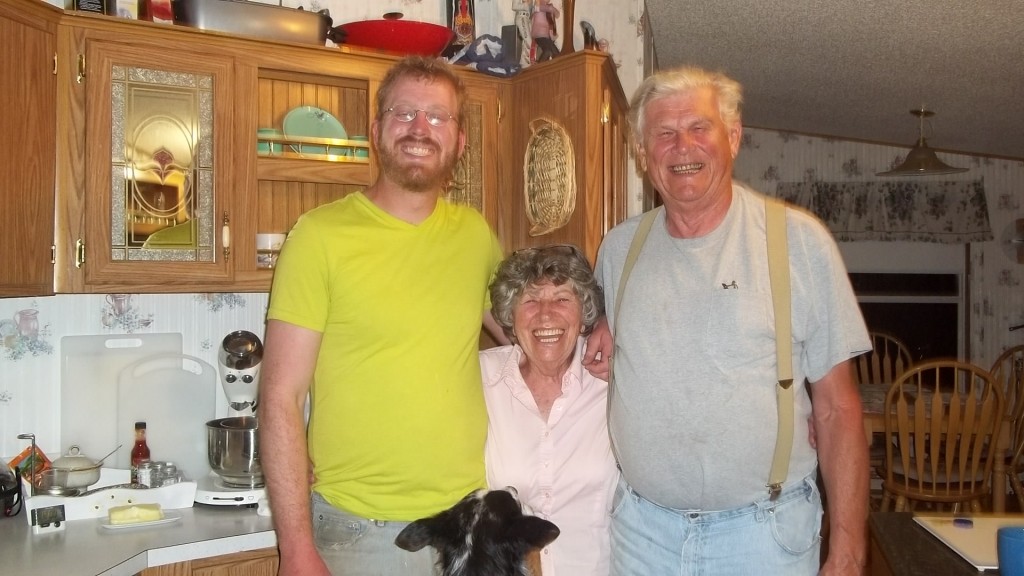 Thanks again to Jim, Darlene and Hal for putting up some weird stranger in their house. Great people.