We drove 300 miles across Idaho & didn’t see a single potato.

There I was on the back of some ATV at the mercy of the 13-yr-old driving. From my vantage point, clutching the rear support, I can clearly see the warning label that states this vehicle is never suitable for more than one person, no one under 16 should operate & the driver should always wear a helmet. We’re zero for three on the rules & clocking 37 mph. I’m thinking about ditching my iPod so I can use my left hand for proper support, but after five years of precious music compiling, it seems worth the risk.

From another vantage point we probably look pretty funny. ATVs are pretty huge & James is a skinny youngster. Imagine Barbie jammed into the front of Ken’s Jeep. Then there’s me on the back, naturally as uncoordinated as they come, barely holding on as the hillbilly teen from hell tears across potholes as if some avalanche is closing in. It’s hard to tell if he’s naturally this reckless or ups it a few notches when a wide-eyed city slicker comes through.

Either way, bury me w/my iPod.

My first visit to the weirdly-shaped state of Idaho was the stay w/the Meyer family in Kooskia. W/me in tow is none other than Keyne “Big Momma” Stanford, who I scooped up in Spokane, WA & together we made our few-hour trek into the countryside Idaho. 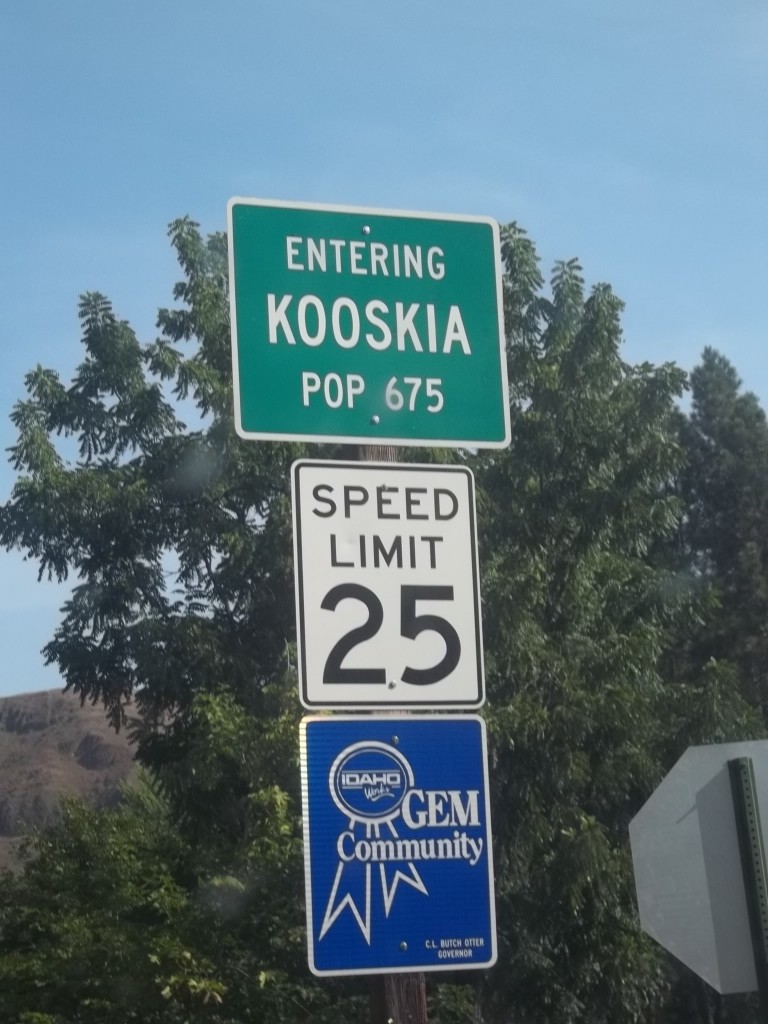 The Meyer family is made up of 8 kids, w/a 15 yr age span – just like my mom – who is one of eight too (formerly, Mary rest her soul). Each of the kids is confident/delightful & the older ones especially took us under their wing w/farming tips & family lore. They really enjoy Keyne’s similar sibling situation & inquired how they were disciplined. Stories of spanking w/a ping-pong paddle (rumor has it that my Grandma’s name was labeled on it) or a hairbrush or whatever was close by brought smiles to my mother’s face as this old-fashioned discipline is not frowned upon in this house either.

After a quick tour of the farm, the first evening we were taken to a country potluck of about 40 people. The whole thing was a little awkward for us, as the only people we “knew” there we had met about three hours ago. My sister Claire would have just died. Ha. I forgot to ask why later, but in the main room where we gathered had about 10 queen-sized beds all lined up in a row. Maybe the house moonlighted as a orphanage? An elderly woman played the accordion & we were taught, of all thing, the Virginia Reel. We of the Stanford/Kennedy crowd all have our roots in VA:) 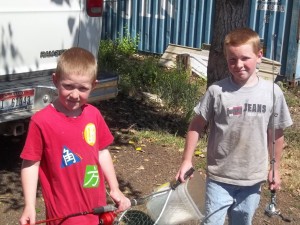 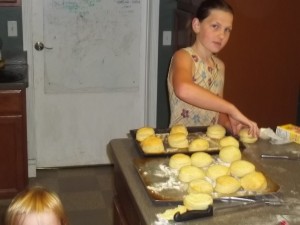 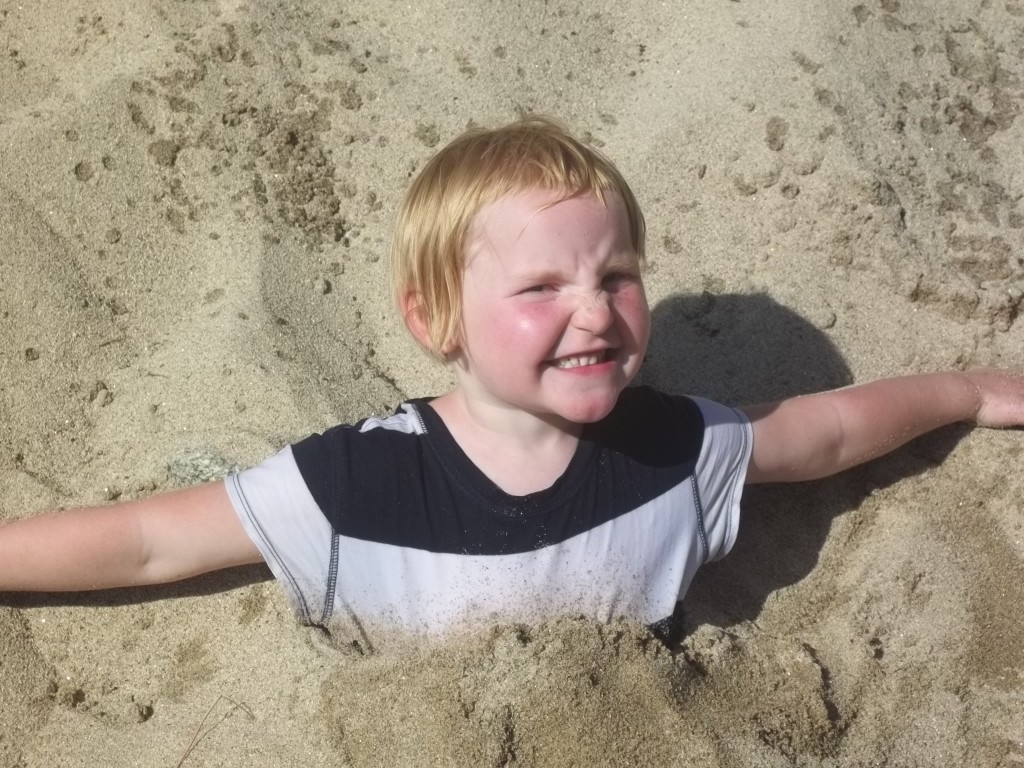 The farm is hilly & careworn w/the comings & goings of such a large family. They have a few turkey tractors here, which are small, movable structures that turkeys (or chickens) live in. One would move this structure around to allow the grazing animals to feed in specific locations only, while they also spread out their manure for fertilization effects. Google it, it’s a great concept. There are also ducks, chickens, roosters (a blonde one’s personal mission – to wake us up at 5 a.m. w/a dozen consecutive cock-a-doodle-doos, the rat) & pigeons which get released daily. Marian, the eldest of the Brady Bunch kids, lets us do a little milking, then proceeds to effortlessly tenfold our five-minute effort in a matter of seconds w/her superior method. I dug the goat milk but I could tell Keyne was holding out for her cow stuff back in the city. 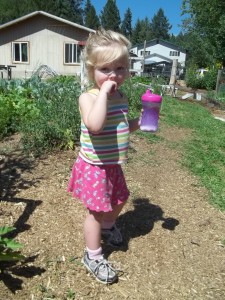 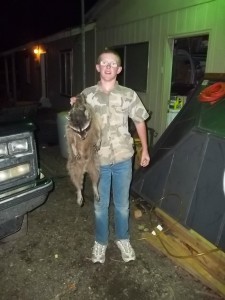 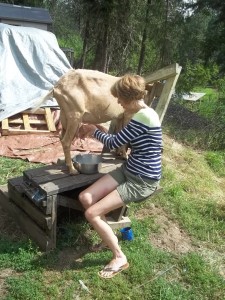 Keyne mostly helped Elizabeth (the mom) in her huge garden – weeding, planting, watering & harvesting. What a treat just to pick & eat tender raspberries. The ladies picked all the kale to clear it for a new crop and mum juiced the leaves. We would shake the wild plum tree – plums the size of cherry tomatoes – gather the little guys, juice them & make jelly. They had hundreds of cans in the back room, mostly jellies & such.

We fit into our gender-specific roles pretty well here. Again, Keyne in the garden/kitchen & me outside w/the dad (Jim) on some carpentry gig. The men (besides me, who is probably not considered 100% A MAN out here) are never ever seen in the kitchen & the women never work w/tools or build anything. Jim is the patriarch of the family & his word is law in a way you have never seen. 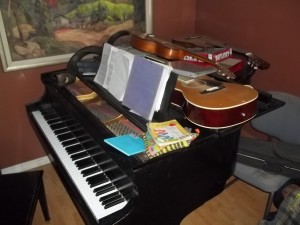 The kids wait on him bringing him water/food & whatever else he asks for. There is never a please, a thank you & he never needs to repeat himself. His opinions are those the entire family restates. He carries a handgun at all times & is very outspoken about his faith/politics. One weekend the whole family gets stomach flu, one by one; Keyne & I eventually succumb. The day Jim gets it, the whole farm shuts down & the coveted videos entertain the kids who otherwise never watch TV. They just LOVE The Beverly Hillbillies, which I think is pretty dated, but I gathered the mom likes those old-fashioned views for her kids. They ate it up, even though they had seen every one what seemed like a number of times. 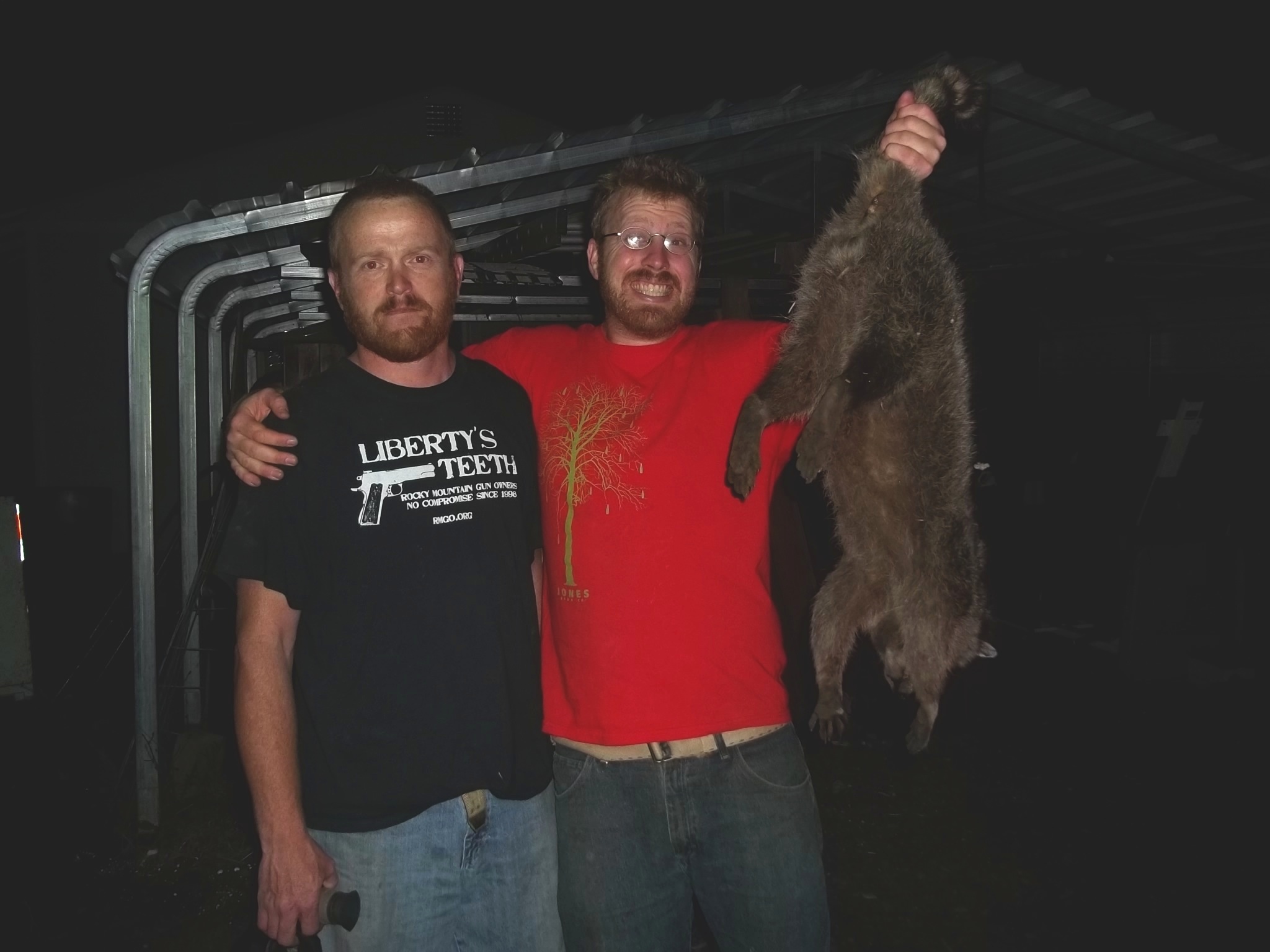 This raccoon, otherwise minding it’s own business, was shot & killed late Saturday evening. There are no current leads to the murder. 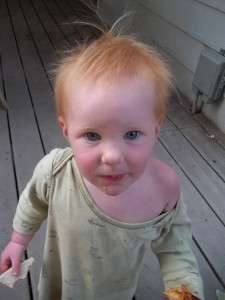 The youngest kids are extra fun. Hally, the one-year-old, pictured to the left, is quite active for someone that young. I didn’t think much of it, but my mom seemed nothing short of amazed that someone so young had the run of the entire farm to herself, toddling out to the garden or sauna to find her parents. How different her experiences & motor skills must be compared to a toddler growing up in an apartment. The three-year-old Amanah, we noticed had super-short bangs & we kind of knew why (she cut her own hair) but didn’t want to ask as fashion doesn’t seem important way out here. The five & seven-year-old boys (Barack & Talon, great names) we almost never see as they fish all day in the pond up the road. What a life.

We grow very fond of the 10-year-old Margaret, who tells long (but cute) stories punctuated w/ “and guess what happens next?” & won’t move on until you’ve guessed at least three times, though that’s usually a rhetorical question. She & I moved wood one morning and I was right below my capacity for the lifting & noticed she was having a hard time too. Apparently I am only a little stronger than this ten-year-old girl. I’d also like to note here I beat every older child in arm wrestling, albeit mostly girls. I’ll take it. 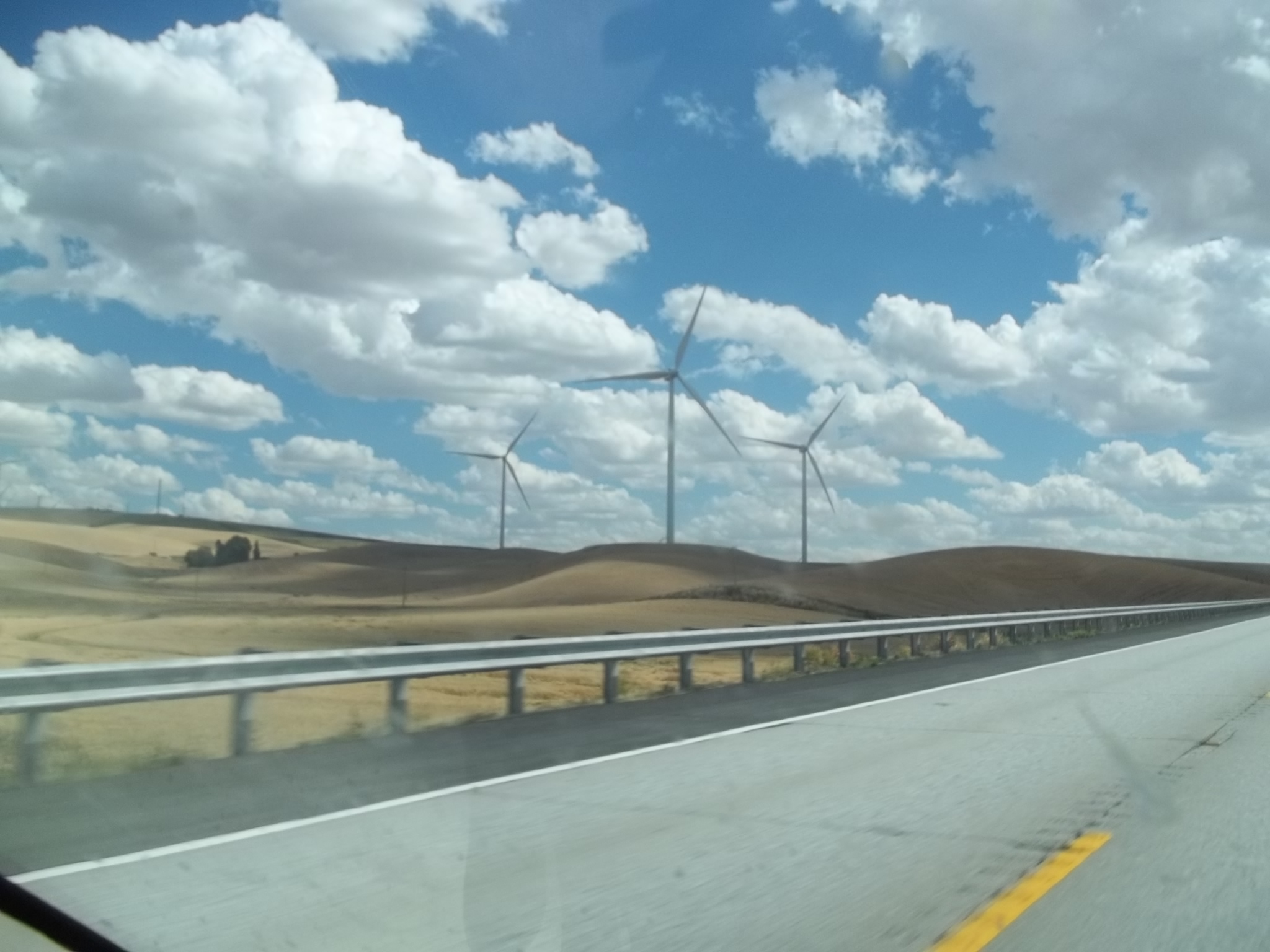 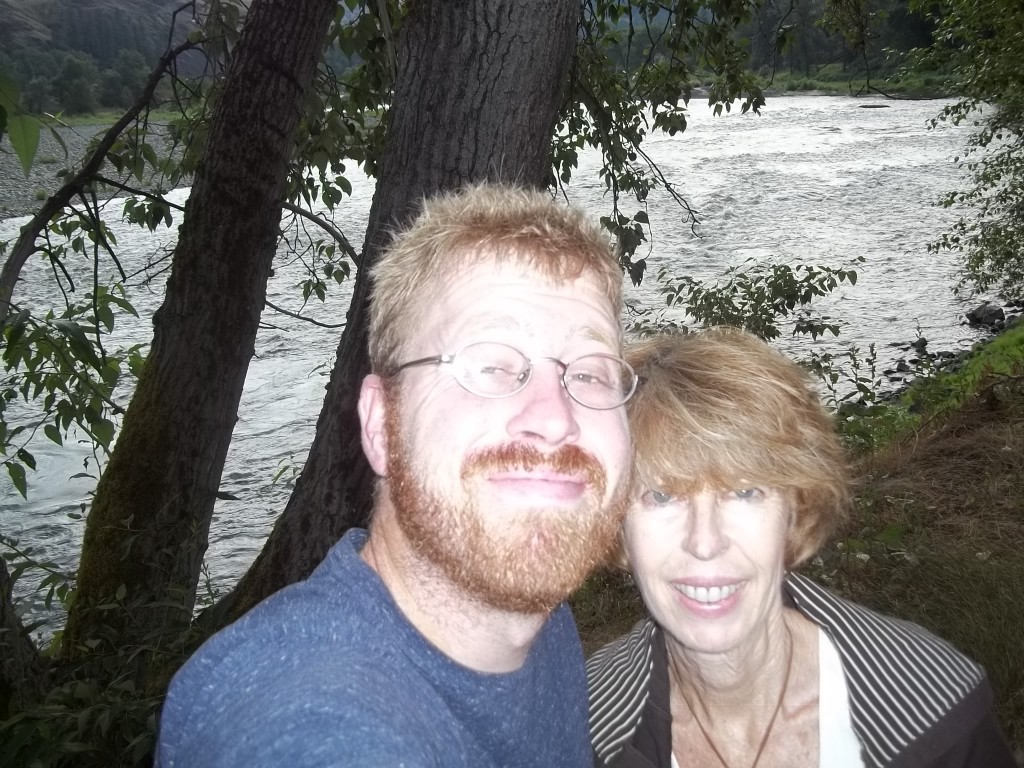 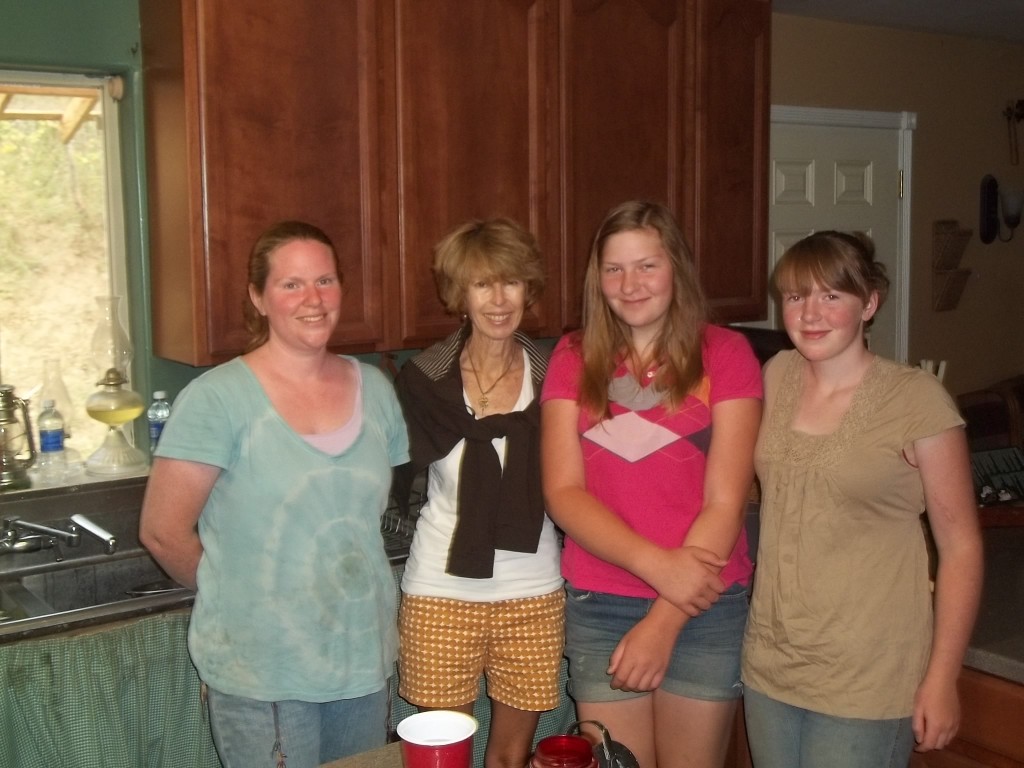 Marian, the oldest -far right in the picture above- hopes to become either a chef or a midwife (indeed she’s attended the births of the younger siblings & knows all the birthing language) someday unless she “gets married early” she says. My mother noted it’s hard not to think such a bright, attractive, mature young lady could have a brilliant career. Whatever those kids do, they just need to leave Kooskia & Idaho for a few years. They have great parents no doubt, but only a small selection of view points survive on that farm. 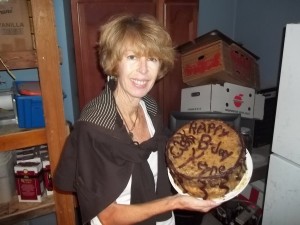 We probably didn’t work as hard as we could have w/the flu cropping up all week, though everyone had it at some point so they were understanding when we did. In fact, Keyne got a cake but was so sick on her birthday (happy 57th Keyne!) that we only got a quick pic w/the cake before rushing off to the airport. We did appreciate the way the whole family embraced us city slickers & hope in turn we were able to somehow bring in the outside world to such a hardworking clan.

Plus, Keyne didn’t flee East via Greyhound day two on the farm, which means brother Bret owes me $20 cash:)

4 thoughts on “We drove 300 miles across Idaho & didn’t see a single potato.”